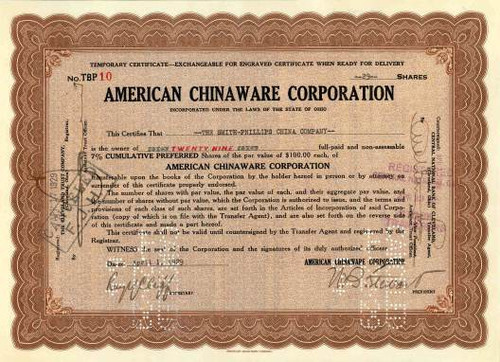 Beautifully engraved certificate from the American Chinaware Corporation issued in 1929. This historic document was printed by the American Banknote Company and has an ornate border around it. This item is hand signed by the Company's President ( W. B. Stewart ) and Secretary ( C. Cliff ) and is over 76 years old. The is the first time we have had this certificate for sale. The certificate was issued to the Smithe - Phillips China Company. In 1929, eight firms decided to consolidate and form the American Chinaware Corporation. The merger included Carrolton Pottery, French China Company, Knowles, Taylor, Knowles, Morgan Belleek China , National China Co of East Liverpool, Pope-Gosser, Saxon China, The Sebring Manufacturing, Smith Phillips China, and West End Pottery. The American Chinaware Corporation was short lived and filed for bankruptcy on November 15, 1932 during the midst of the depression.