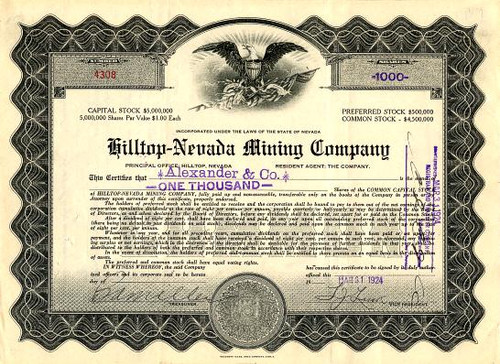 Beautiful Stock Certificate from the Hilltop - Nevada Mining Company issued no later than 1925. This historic document was printed by the Security Banknote Company and has a green ornate border around it with a vignette of an Eagle and Liberty Shield. This item is handsigned by the company's president and is at least 83 years old. 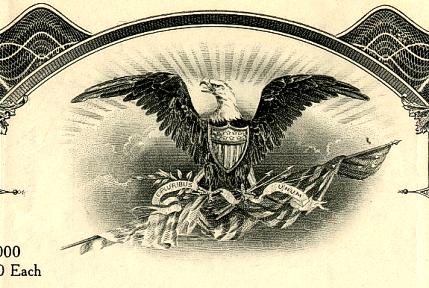 Certificate Vignette
The Hilltop Nevada Mining Company was organized in 1920 and purchased the holdings of the defunct Kimberly company at a sheriff's auction. About 20 miners remained in the camp, as the Hilltop Nevada Company expanded its operations. The company spent $300,000 in 1922 to build a 150-ton flotation mill, which began operations in October. The mill was not a success and operated only until September 1923. The mill was moved to Dayton (Lyon County) in 1934. The company continued to mine the district until the late 1920s. By the time operations were curtailed in 1927, $1.5 million had been produced. After Hilltop Nevada closed, Hilltop became a virtual ghost town.