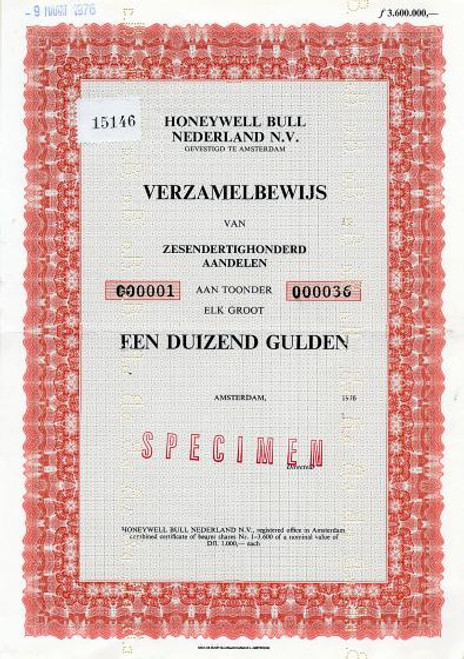 Beautiful engraved specimen certificate from the Honeywell Bull Nederland N.V. dated in 1976. This historic document was printed by Druk De Bussy Company and has an ornate border around it. This item is over 31 years old. Groupe Bull (also known as Bull Computer or simply Bull) is a French computer company based in Les Clayes-sous-Bois, outside Paris. The company has also been known at various times as Bull General Electric, Honeywell Bull, CII Honeywell Bull, and Bull HN. Bull was founded in 1931, as H.W. Egli - Bull, to capitalize on the punched card technology patents of Norwegian engineer Fredrik Rosing Bull (18821925). After a reorganization in 1933, with new owners coming in, the name was changed to Compagnie des Machines Bull. The company has undergone many takeovers and mergers since its formation. In particular, it has had various ownership relations with General Electric, Honeywell, and NEC from the 1960s to the 1980s, and Motorola, Debeka, and France TÃ©lÃ©com more recently. It acquired Honeywell Information Systems in the late 1980s, and later also had a share of Zenith Data Systems and Packard Bell. Groupe Bull was nationalised in 1982 and was merged with most of the rest of the French computer industry. In 1994 the company was re-privatised. Using the slogan "Architect of an Open World", Bull today claims to be an information technology company dedicated to helping corporations and public sector bodies develop open and secure information systems to sustain their business strategies. The premier European-based global IT supplier, Bull has a worldwide presence in more than 100 countries, and is particularly active in the defense, finance, healthcare, manufacturing, public and telecommunication sectors. A 1990 Honeywell-Bull DPS 7 mainframeRecent major products of the company are the scalable Bull NovaScale family of Itanium 2-based servers for High Performance Computing and commercial applications and the high-availability Bull Escala family of IBM Power5-architecture servers. Bull also has a Bull DPS-9000 mainframe computer range (catering to long-time customers with Bull computer installations) and a blade server line. All new products are available with a distribution of Linux as an option. Bull also offers services, including IT consulting (from IT architecture and 'urbanization' to project management support), IT integration and IT operations. History from Wikipedia and OldCompanyResearch.com. About Specimens Specimen Certificates are actual certificates that have never been issued. They were usually kept by the printers in their permanent archives as their only example of a particular certificate. Sometimes you will see a hand stamp on the certificate that says "Do not remove from file". Specimens were also used to show prospective clients different types of certificate designs that were available. Specimen certificates are usually much scarcer than issued certificates. In fact, many times they are the only way to get a certificate for a particular company because the issued certificates were redeemed and destroyed. In a few instances, Specimen certificates we made for a company but were never used because a different design was chosen by the company. These certificates are normally stamped "Specimen" or they have small holes spelling the word specimen. Most of the time they don't have a serial number, or they have a serial number of 00000. This is an exciting sector of the hobby that grown in popularity over the past several years.