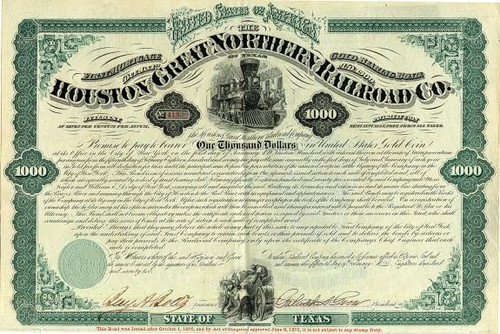 Beautiful uncancelled Gold Bond certificate from the Houston and Great Northern Railroad Company issued in 1872. This historic document was printed by Continental Banknote Company and has an ornate border around it with a vignette of a steam locomotive. This item has the signatures of the Company's President, Galusha Aaron Grow and Secretary and is over 135 years old. 53 coupons attached on bottom.

Certificate Vignette
HOUSTON AND GREAT NORTHERN RAILROAD. The Houston and Great Northern Railroad was chartered on October 22, 1866, to build from Houston to the Red River and on to the Canadian border. Reconstructionqv difficulties prevented any work for several years, but the contract for the first hundred miles was let on December 14, 1870. The early organizers of the railroad were Ebenezar B. Nichols, William Marsh Rice,qqv W. J. Hutchins, H. D. Taylor, and B. A. Shepherd, all of Texas; and Moses Taylor of New York City. The first officers of the railroad were Charles G. Young,qv president; E. C. Stockton, secretary; and P. J. Willis, treasurer. In 1871 the railroad built fifty-five miles of track between Houston and New Waverly, and the next year it finished fifty-six miles between New Waverly and Crockett. In 1873 it acquired the Houston Tap and Brazoria Railway and the Huntsville Branch, a total of fifty-eight miles. That year it also laid eighty-four miles of track between Crockett and Palestine and between Troup and Mineola. In 1873 the Houston and Great Northern transferred its 253.1 miles of track to the International-Great Northern and became part of that system. History from the Handbook of Texas Online. Galusha Aaron Grow (August 31, 1822 March 31, 1907) was a prominent U.S. politician, lawyer, writer and businessman, and was Speaker of the House of Representatives from 1861 to 1863. He was defeated for reelection in 1862. He remained the last sitting House Speaker to be defeated until Tom Foley lost his seat in the Republican landslide of 1994. Grow was born in Ashford, Connecticut, and educated at Franklin Academy in Glenwood, Pennsylvania and Amherst College. He then studied law in Norwich, Connecticut and Montrose, Pennsylvania. Galusha Aaron GrowGrow was admitted to the bar in November 1847, and practiced law in Towanda, Pennsylvania from 1847 to 1848, in Montrose, Pennsylvania from 1848 to 1852, and in Glenwood, Pennsylvania. He was elected a member of Congress as a Democrat to the 32nd, 33rd, and 34th congresses and as a Republican to the 35th, 36th, and 37th congresses. In the session of February 5, 1858, he was involved in a fight with fellow congressman Laurence M. Keitt in the House chambers. Grow was a delegate to the Republican National Convention in 1864 and 1868. He moved to Houston, Texas in 1871, and was president of the International & Great Northern Railroad of Texas from 1871 to 1875. He then returned to Pennsylvania and the practice of law from 1875 to 1894. Grow returned to the United States Congress as a member at-large from Pennsylvania from 1894 to 1903; was the chairman of the committee on education in the 56th Congress; and resided in Glenwood, Pennsylvania from 1903 until his death at age 84.