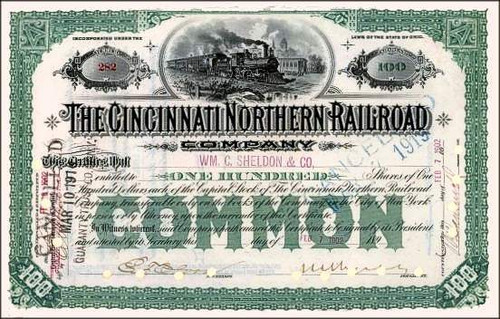 Beautifully engraved certificate from the Cincinnati Northern Railroad Company issued in 1902. This historic document was printed by the Homer Lee Banknote Company and has an ornate border around it with a vignette of a train. This item is hand signed by the Company's President and Secretary and is over 100 years old. 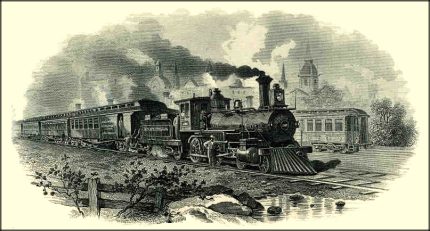 Certificate Vignette
The original Cincinnati Northern Railroad Company was organized in June, 1897, to take over and operate the Ohio Division of the Cincinnati Jackson and Mackinaw Railway Company, from Franklin, Ohio to Addison Junction, Michigan, 187.53 miles, with branches from Lewisburg, Ohio, to Quarries 1.12 miles and Germantown, Ohio, to Distillery, 1.84 miles; total, 190.49 miles. On August 1, 1897, the company took possession of this property, and also acquired the line of the Jackson and Cincinnati Railroad Company, extending from Addison Junction, Michigan, to Jackson, Michigan, 17.65 miles; the, combined mileage of these two properties being 208.14 miles. These properties constitute the present Cincinnati Northern Railroad reorganized as of January 1, 1902. The Cincinnati Northern road enters Cincinnati on the Cleveland Cincinnati Chicago and St Louis Railway over which it has trackage rights from Franklin Junction, Ohio, to Cincinnati, 38.40 miles, and at Jackson, Michigan, has trackage rights over the Lake Shore and Michigan Southern Railway 1.22 miles, making total mileage operated 247.76 miles. The Cleveland Cincinnati Chicago and St Louis Railway Company controls this line through ownership of a majority of the capital stock.