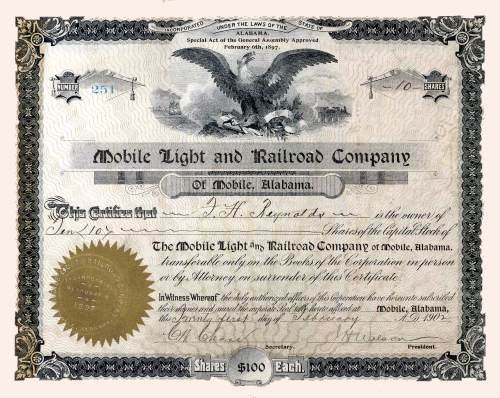 Beautifully engraved certificate from the Mobile Light and Railroad Company issued in 1902. This historic document has an ornate border around it with a vignette of an eagle. This item is hand signed by the Company's President ( J. Howard Wilson ) and Secretary and is over 100 years old. History is from the City of Mobile, Alabama 1893 - Mobile's First Electric Street Car Line Begins Operation Ironically enough, the first passenger on Mobile's First Electric Street Car was not even a resident of the city, the state, or the region. He was Charles James - a resident of Milwaukee, Wisconsin. J. Howard Wilson, the president of the Mobile Light and Railroad Co., preserved Mr. James' fare -five cents - in a tiny wooden box along with a newspaper clipping reporting the electric street car's premier. On January 9, 1893, The Register described the event as follows: "The Electric Railway Company started for the carriage of passengers yesterday morning at half past ten o'clock. The car made trips all day from the termini, Dauphin and Jackson, and Virginia and Marine, and was crowded every trip. Mr. Charles James, of Milwaukee, Wisconsin, a visitor in the city, paid the first fare received by the new enterprise." Raphael Semmes, Jr., son of the famous Admiral Semmes, returned to Mobile from Memphis to manage the electric railway system. Mr. Semmes had left for Memphis at the close of the war and became quite adept in the streetcar business. By 1939, the city's street railway system had expanded to include 50 route miles. At this time, a few buses were being operated as well as the electric street car, with an agreement between Mr. Wilson and the City that the replacement of street cars by buses would happen gradually. Despite this agreement,The National City Lines acquired a controlling interest in the Mobile Light & Railway Co. after Mr. Wilson's death and quickly replaced all street cars with buses.