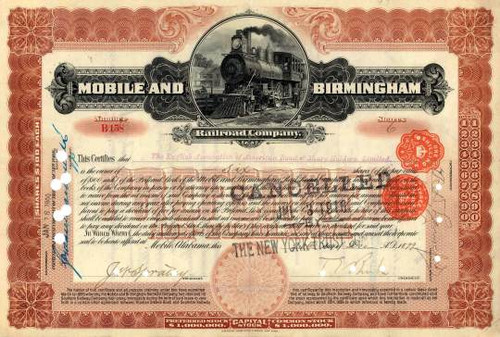 Beautifully engraved certificate from the Mobile and Birmingham Railroad Company issued in 1899. This historic document was printed by the American Banknote Company and has an ornate border around it with a vignette of a train. This item is hand signed by the Company's President and Secretary and is over 104 years old. The certificate was issued to The English Association of American Bond & Share Holders, Limited, and has an orange English Tax Stamp affixed to it.

Certificate Vignette
The Mobile and Birmingham Railroad Company was incorporated in Alabama, July 2, 1895, as a reorganization of the Mobile and Birmingham Railway Company. The line was leased to the Southern Railway Company for 99 years from March 1,1899, at a rental equal to the interest on the bonds in addition to the guarantee of a dividend on the $900,000 preferred stock of 1% for the first year, 2% for the second year, 3% for the third year, and 4% thereafter. The company's main line ran from Mobile to Marion Junction, with several small branches. Mileage of the lines in 1921 totaled 191 with the main line and branches having 152 miles and all other totaled 39 miles. The company had 13 locomotives, 12 passenger cars, 333 freight cars, and 20 service cars. The company eventually became part of the Norfolk Southern Railway Company.