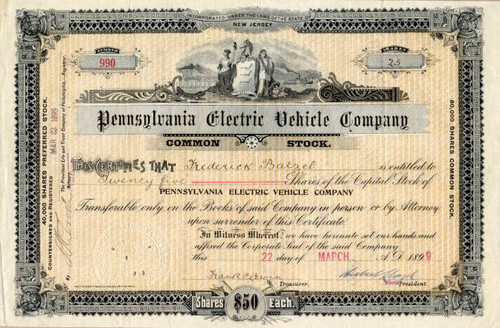 Beautiful certificate from the Pennsylvania Electric Vehicle Company issued in 1899. This historic document was printed by the WMF Murphy's Sons Company and has an ornate border around it with a vignette of the New Jersey State Seal. This item has the original signatures of the Company's President, Herbert Lloyd and Secretary,Frank C. Lewin and is over 114 years old.

Certificate Vignette
The Manual of Statistics: Stock Exchange Hand-book ..., Volumes 24-25 - 1903 PENNSYLVANIA ELECTRIC VEHICLE CO. A corporation formed under the laws of New Jersey, February 9, 1899, as the Philadelphia Motor Wagon Co., and name changed to present title. The objects of the company are to operate, manufacture, buy, sell and lease self-propelling and other vehicles, to deal in patents therefor, to receive and grant licenses thereunder, and to manufacture machines and appliances connected therewith. This company is the exclusive licensee for the State of Pennsylvania of the Electric Vehicle Co. The company leases a building, 250-256 North Broad street, Philadelphia, as a central station for the operation of electric vehicles in that city. The preferred stock is 6 per cent., non-cumulative. The stock was originally $4,000,000 common and $2,000,000 preferred, the par value of both being $50. The common was issued, full paid, and on the preferred $10 per share was paid in. In December it was reduced to the par value of the stock, from $50 to $10 per share, thus making the preferred full paid, and reducing the capital to the present amount. Transfer agency, Land Title Building, Philadelphia. Registrar, Provident Life & Trust Co., Philadelphia. President, Herbert Lloyd; Vice-President, John R. Williams; Secretary and Treasurer, Frank C. Lewin. Directors--Herbert Lloyd, Henry G. Morris, Pedro G. Salom, John R. Williams, Justus B. Entz, Frank C. Lewin, A. B. Stoughton. Main office, 250 North Broad street, Philadelphia. Annual meeting, third Tuesday in February. History from Encyberpedia and OldCompany.com (old stock certificate research service)