In celebrating the famous Cinerama Movie "How the West was Won" we are offering the following 9 Piece package of old stock certificates. You can check out our site for a complete description of each. The historic package includes the Cinerama Movie Company($7.95), Stetson Hat Company ($59.95), Western Wax Company ($9.95), Buckeye Steel Company ($19.95), Internal Revenue Tobacco Tax Certificate ($29.95), Goldfield Consolidated Mines signed by George Wingfield ($39.95), Santa Cruz County National Bank ($14.95), Tonapah Mining Company of Nevada ($19.95), and the Packard Car Company ($29.95). The total Scripophily value is $232.55 and we are discounting it to $139.95 for a savings of over $92! . Cinerama Corporation Beautifully engraved Certificate from the Cinerama Corporation dated 1960's - 1970. This historic document was printed by the Security - Columbian Banknote Company and has an ornate border around it with a vignette of an eagle spreading its wings. This item has the printed signatures of the company's officers including William R. Forman as President and is over 30 years old. William Forman was a pioneer in the motion picture distribution business. He not only was a major contributor in Cinerama, he also was one of the founders in Robin International, Urban Drive-In Theatres and Pacific Theatres. Pacific Theatres is currently owned and managed by the Forman Family and includes the Gaslamp 15 in San Diego and the Cinerama Dome, a giant-screen geodesic dome and famous Hollywood landmark (under renovation) among other theatres. In addition, Pacific Theatres is a partner in a new Polish multiplex theater chain called Silver Screen, which currently operates one theater in Warsaw and has several more in development across Poland. It also owns and manages real estate through Pacific Theatres Realty. William Forman also produced, Krakatoa, East of Java. 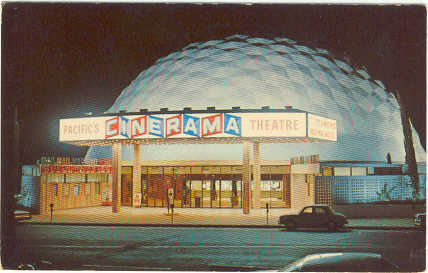 The first Cinerama theatrical releases were travelogue documentary adventures which became unparalleled box office hits even though they played in only a few exclusive road show locations. Their audience attendance rivaled and often surpassed those of the Hollywood films produced in that era. The first Cinerama production, This Is Cinerama played for only three months in one large Broadway theater and became the number one box office film hit of the entire year. Later, all but two of the Cinerama films that followed the first smash hit were listed within the top ten box office blockbusters of their year. Hollywood studios were taken aback by Cinerama's early successes and set their technical teams to develop wide screen systems of their own. Thus began an era of wide screen processes such as CinemaScope, VistaVision, Technirama, Superscope, which all were eventually dominated by Panavision. At the peak of the format's popularity there were over 230 theaters around the globe showing ten performances a week. In 1961 the first Cinerama productions to tell a story were produced by Cinerama, Inc. and Metro-Goldwyn-Mayer. They were The Wonderful World of the Brothers Grimm and How the West Was Won, the latter becoming the number one box office champ of 1962. However, due to the expense of conventional Hollywood production in the process, as well as the technical restrictions imposed on the filmmakers, the bottom line prevailed and How the West Was Won was the last true Cinerama feature. However, Cinerama lived on in a 70mm version at the exclusive Cinerama road show houses for over seven more years. The exhibition of classics like It's A Mad, Mad, Mad, Mad World, Grand Prix, and 2001, A Space Odyssey caused the familiar Cinerama name and logo to survive into the 1970's. There is a new movie called The Cinerama Adventure. It is a feature length documentary chronicling the amazing history of the long lost three-camera, three-projector cinematic process which thrilled millions around the world in the 1950's and early 60's. It all began with a secret virtual reality aerial training device in 1942, that had a substantial impact on the Allies' war efforts. Unlike the 3-D fads of the early 1950s, Cinerama enjoyed a steady 14 year reign, ultimately playing in over 200 specially equipped theaters in most major cities around the globe. Wildly popular, these "Wonder Hunting" Cinerama productions were almost always listed within the top ten box office grossing films of the year, with two titles landing in first place. Check out The Cinerama Adventure website at by Clicking Here. Cinerama was devised by Fred Waller, special effects engineer and prodigious inventor. Waller was also responsible for, among other things, water skis, a 360-degree panoramic camera, a remote sensing maritime anemometer and the Waller Gunnery Trainer, which could be considered a forerunner of arcade games and the modern flight simulator. 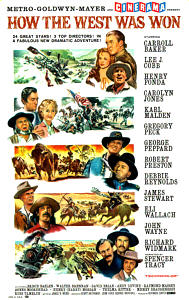