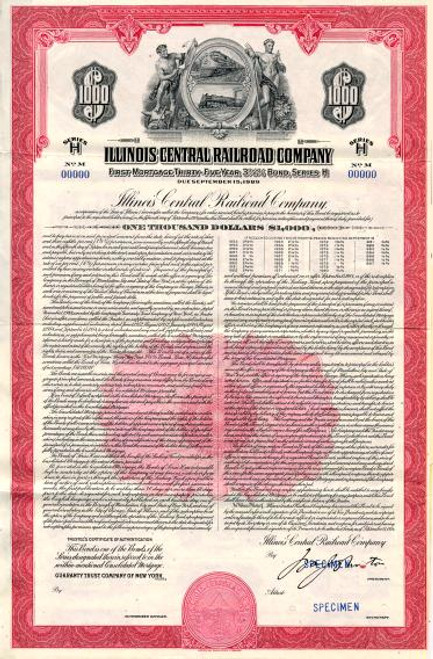 Beautifully engraved specimen certificate from Illinois Central Railroad Company dated 1954. This historic document was printed by American Bank Note Company and has an ornate border around it with a vignette of two allegorical men and a railroad train. This item is over 52 years old.

Certificate Vignette
The Illinois Central (AAR reporting mark IC), sometimes called the Main Line of Mid-America, was a railroad carrier in the central United States, with its primary routes connecting Chicago, Illinois with New Orleans, Louisiana and Birmingham, Alabama. A line also connected Chicago with Sioux City, Iowa (1870). There was a significant branch to Omaha, Nebraska (1899) west of Fort Dodge, Iowa and another branch reaching Sioux Falls, South Dakota (1877) starting from Cherokee, Iowa. 1850 mapThe IC was one of the earlier Class I railroads in the US. Its roots stretch back to abortive attempts by the Illinois General Assembly to charter a railroad linking the northern and southern parts of the state of Illinois. In 1850 U.S. President Millard Fillmore signed a land grant for the construction of the railroad, making the Illinois Central the first land-grant railroad in the United States. The Illinois Central was officially chartered by the Illinois General Assembly on February 10, 1851.[1] Upon its completion in 1856, the IC was the longest railroad in the world. Its main line went from Cairo, Illinois, at the southern tip of the state, to Galena, in the northwest corner. A branch line went from Centralia (named for the railroad) to the rapidly growing city of Chicago. In 1867 the Illinois Central extended its track into Iowa. Throughout the 1870s, and 1880s the IC acquired and expanded railroads throughout the southern United States. IC lines crisscrossed the state of Mississippi and went as far as New Orleans, Louisiana to the south and Louisville, Kentucky in the east. In the 1880s, northern lines were built to Dodgeville, Wisconsin, Sioux Falls, South Dakota, and Omaha, Nebraska. Further expansion continued into the early twentieth century. Illinois Central Gulf Railroad: 1972-1998 ICG logoOn August 10, 1972 the Illinois Central Railroad merged with the Gulf, Mobile and Ohio Railroad to form the Illinois Central Gulf Railroad. In the 1980s, the railroad spun off most of its east-west lines and many of its redundant north-south lines, including much of the former GM&O. Most of these lines were bought by other railroads, including entirely new railroads, such as the Chicago, Missouri and Western Railway and Chicago Central and Pacific Railroad. On February 29, 1988, the ICG dropped the "Gulf" from its name and again became known as the Illinois Central Railroad. Canadian National Railway: 1998-present On February 11, 1998 the IC was purchased by the Canadian National Railway; integration of operations began July 1, 1999, though the Illinois Central name continued to be used until after the railroad's sesquicentennial in 2001. As time passes, the IC identity is slowly fading through CN's maintenance and repainting programs, although some CN locomotives retain the IC reporting marks on their cabs. The Illinois Central was a major carrier of passengers on its Chicago-New Orleans mainline and between Chicago and St. Louis. Illinois Central's largest passenger terminal, Central Station, stood at 12th Street east of Michigan Avenue in Chicago. Due to the railroad's north-south route from the Gulf of Mexico to the Great Lakes, Illinois Central passenger trains were one means of transport during the African American Great Migration of the 1920s. Illinois Central's most famous train was the Panama Limited, a premier all-Pullman car service between Chicago, St. Louis, Missouri, and New Orleans. In 1967, due to losses incurred by the operation of the train, the Illinois Central combined the Panama Limited with a coach-only train called the Magnolia Star. On June 1, 1971 Amtrak took over the operation of the service, but shortly afterword dropped the name in favor of the City of New Orleans, a daytime train that had been operated by the Illinois Central whose name was popularized by a song by Steve Goodman. The Green Diamond was the Illinois Central's premier train between Chicago and St. Louis. Other important trains included the Hawkeye which ran daily between Chicago and Sioux City and the City of Miami eventually running every other day between Chicago and Miami via the Atlantic Coast Line, The Central of Georgia Railroad and Florida East Coast Railway. The Illinois Central was always a major Chicago commuter line operating electrified trains from its Michigan Avenue stations to the southeast suburbs until this traffic was assumed by Metra. History from Wikipeida and OldCompanyResearch.com About Specimens Specimen Certificates are actual certificates that have never been issued. They were usually kept by the printers in their permanent archives as their only example of a particular certificate. Sometimes you will see a hand stamp on the certificate that says "Do not remove from file". Specimens were also used to show prospective clients different types of certificate designs that were available. Specimen certificates are usually much scarcer than issued certificates. In fact, many times they are the only way to get a certificate for a particular company because the issued certificates were redeemed and destroyed. In a few instances, Specimen certificates we made for a company but were never used because a different design was chosen by the company. These certificates are normally stamped "Specimen" or they have small holes spelling the word specimen. Most of the time they don't have a serial number, or they have a serial number of 00000. This is an exciting sector of the hobby that grown in popularity over the past several years.