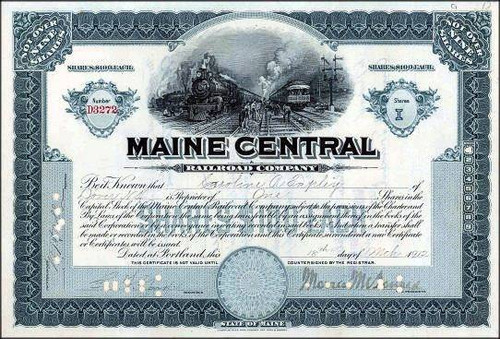 Beautifully engraved certificate from the Maine Central Railroad Company issued no later than 1915. This historic document was printed by the American Banknote Company and has an ornate border around it with a vignette of two trains. This item is hand signed by the Company's President (Morris McDonald) and its Treasurer and is over 90 years old. The Maine Central Railroad Company was organized in October, 1862 in Waterville, Maine. The main line from Waterville to Portland via Augusta and Brunswick, known as the Lower Road, was purchased in 1870. In the same year, Maine Central acquired railroad from Augusta to Skowhegan, now known as the Skowhegan branch. In 1871, Maine Central acquired rail line from Brunswick to Lewiston and from Leeds Junction to Farmington. In 1883, it then acquired the rail line from Bucksport to Bangor, which is now known as the Bucksport branch. The line from Bangor to Mattawamkeag was purchased in 1955. What is now known as the Calais Branch between Bangor and Calais was originally built in 1832 with wooden rails and horse drawn power. This was the first railroad built in the State of Maine. Guilford Trans. Ind. (GTI) acquired Maine Central RR & the Boston and Maine RR in the early 1980's. Historic information is from the State of Maine website.