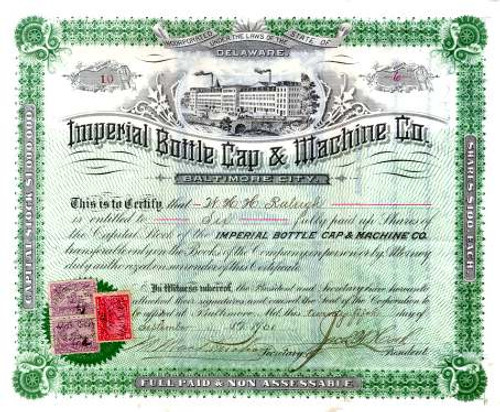 Beautifully engraved certificate from the Imperial Bottle Cap and Machine Company issued in 1901. This historic document has an ornate border around it with a vignette of buildings. This item is hand signed by the company's president, Jacob W. Hook and secretary, Marion M. Prichard and is over 108 years old. Men of Mark in Maryland dated 1907: JACOB WILLIAM HOOK, merchant, manufacturer, banker and president and director of many companies, of Baltimore, Maryland, was born in the city where he has lived for the last fifty-eight years, on the seventh of December, 1849. His father, Jacob Hook, was of German descent and birth (although one of his great grandparents was English) and before he left Germany had served as burgomaster of his native town. With his wife, Mrs. Catherine Hook, he left Germany for America in 1847, and settled in Baltimore, where he became a large property holder in the northeast section of the city, and came to be identified with a number of the financial institutions of the city, although he always declined to be a candidate for political honors. The boyhood of Jacob William Hook was passed in a suburban residence near Baltimore. He was fond of out-of-door life, and was a strong, hearty and happy boy. The influence of his mother upon his moral and spiritual life was deep and strong. He attended private schools through his early boyhood; but when he was fourteen years old, his eager desire to be actively engaged in business led his parents to consent to his withdrawing from school to enter the employ of a wholesale grocery, commission and brokerage house. From that time, the boy became self-supporting; and in his boyhood and youth he established those principles of business life which have contributed to his success and have governed his relations with his business associates for forty years and more. As shipping clerk and general clerk for Wilson, Son & Company, of Baltimore, he started in business in 1863. After some years with this firm, he entered the wholesale hide and tallow business, in which he has been steadily successful. Mr. Hook is president of the Old Town National Bank; of the Provident Building and Loan Association; of the Western Maryland Building and Loan Association; and of the Imperial Bottle Cap and Machine Co. He is also a director of various financial and industrial companies and corporations.