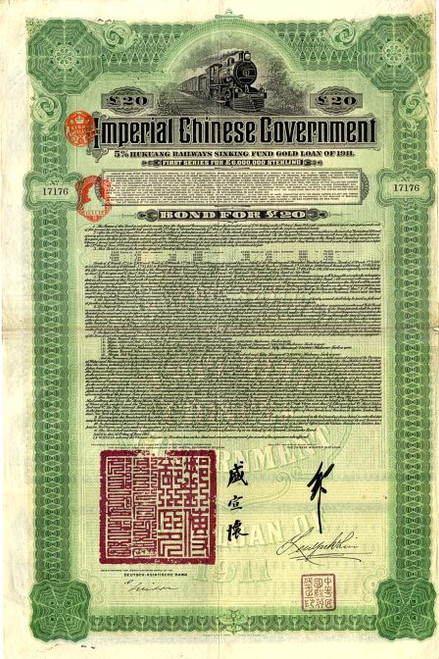 Beautiful uncancelled certificate from the Imperial Chinese Government Gold Bond dated in 1911. This represents a 5% Hukuang Railways Sinking Fund Gold Loan for £20. This historic document was printed by the Waterlow & Sons Limited and has an ornate border around it with a vignette of a train.  37 coupons attached. This item has the printed signatures of the company’s officials and is over 121 years old. Issued by Banque De L'Chine in Paris. Coupons attached.

NEW CHINESE BONDS READY FOR MARKET; American Allotment of a Quarter of $30,000,000 Issue to be Offered To-day.

The first public offering of the Chinese railway bonds, issued in connection with the Imperial Chinese Government loan, will be made to-day by the American bankers who were assigned one-quarter of the $30,000,000 to be put out at this time. J.P. Morgan Co., Kuhn, Loeb Co., the First National Bank, and the National City Bank compose the American syndicate. Simultaneous offerings will be made in London by the Hongkong Shanghai Banking Corporation...