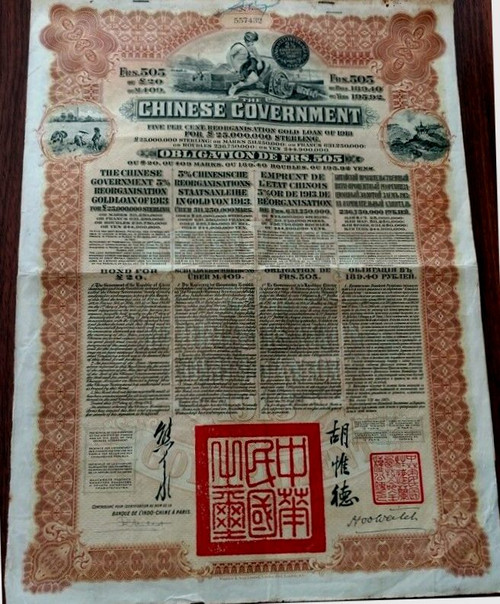 Beautifully engraved uncancelled bond certificate from the Chinese Goverment issued in 1913 by the Russian Asiatic Bank. This historic document was has an ornate border around it with vignettes of an allegorical man, workers in a Officers and is over 119 years old. The Chinese Government 5% Reorganisation Gold Loan of 1913 Bond for RM 511, (20£ ,409 Marks, 189.4 Rubles, 195.92 Yen). The bond is written in four languages; English, German, French and Russian. Russo-Asiatic Bank. Comes with coupons. 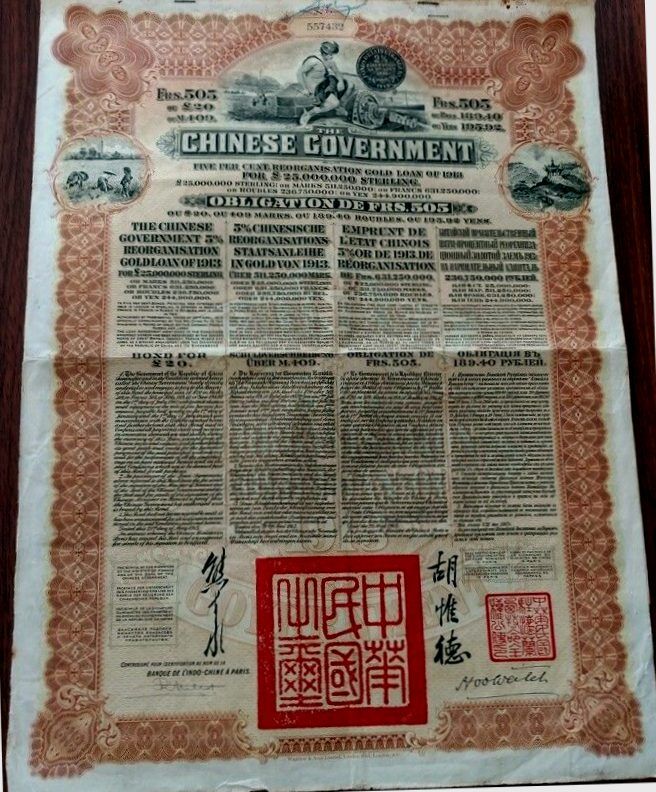 The following is from "Historic Foreign Bonds of China by John M. Thomson just published 2012. The Reorgansation Gold Loan of 1913 was for the capital sum of £25,000,000. The loan was authorised by Presidential Order of 22nd April, 1913 officially communicated by the Wai Chiao Pu to the Ministers in Peking of Great Britain, Germany, France, Russia, and Japan. (The Wai Chiao Pu was the Ministry of Foreign Affairs of the government of the Republic of China). The newly appointed President of the Republic of China, Yuan Shih Kai initially approached Britain, France, Germany, and United States of America seeking a substantial loan to assist the fledgling government of the Republic of China. Later this group was expanded to include Japan and Russia, but eventually the U.S. withdrew from participation, leaving five countries which agreed to assist the Chinese Government with financial aid. The principal financial institutions which participated in the loan arrangements were the Hongkong & Shanghai Banking Corporation, Deuthsch-Asiatiche Bank, Banque de l'Indo Chine, and Russian Asiatic Bank. The Yokohama Specie Bank participated on behalf of Japan, but did not issue separate bonds, countersigned by the bank. Arrangements were made as to convertibility into Japnanese Yen of the bearer bonds issued to by other four issuing banks. The banks all received 6% commission for handling this loan and the capital amounts allocated to each bank together with bonds issued are detailed in the data below: Hongkong & Shanghai Banking Corp. £7,416,000 Deutsch-Asicatiche Bank £6,000,000 Banque de l"Indo-Chine £7,416,660 Russian Asiatic Bank £2,777,780 Russian Asiatic Bank (Belgium) £1,388,880 Purpose of the Gold Reorganization Loan The purpose of the loan was to enable the new government of the Republic of China to meet financial liabilities inherited from the previous Chinese Imperial Government, for the reorganization of government institutions and to meet the administrative costs.