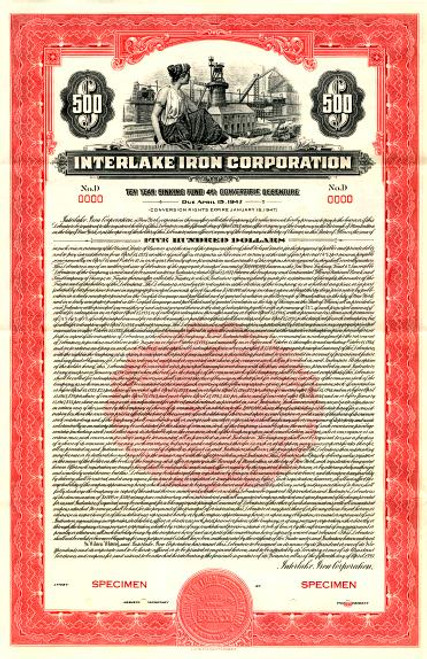 Beautifully engraved specimen from the Interlake Iron Corporation dated in 1937. This historic document was printed by Columbian Bank Note Company and has an ornate border around it with a vignette of an allegorical woman next to a factory. This item is over 69 years old. 20 coupons attached on right side

Certificate Vignette
Interlake History 1882 One of Acme Steel's forerunners, The Quincy Floor Plat and Staple Manufacturing Company (soon renamed The Quincy Hardware Mfg. Company) is incorporated in Quincy,Illinois. 1889 The Quincy Mfg. Company merges with the Acme Flexible Clasp Company, and begins operation under the latter company's name. 1901 Acme Steel Company is incorporated in Illinois in September 1901. 1905 Our forerunner, By Products Coke Corporation, is incorporated in New York and opens its first raw material resources and iron producing plants. 1919 Acme begins rolling its own steel at a plant in Riverdale, Illinois. This was the first major step in achieving the Company's future success. 1929 By Products Coke Corporation acquires assets of Zenith Furnace Company (with a plant in Duluth) and Toledo Furnace Company (with a plant in Toledo) and is renamed Interlake Iron Corporation, a New York corporation. This appears to be the start of the Interlake trademark. 1941 To support the war effort, Acme Steel Company begins producing strip steel for shell casings, anti-aircraft gun mounts, minelayers, strap and band, and other related items. Additional companies are acquired in order to diversify product offering. 1952 Acme Steel Company builds a plant in Ontario to produce strapping and seals. 1954 Interlake in the meantime is busy introducing slotted angle into the marketplace. The product's popularity is immediate and enormous. Interlake expands its roll-formed steel production into storage and rack systems, which will soon become the staple of the Interlake company. This is the fundamental development that subsequently leads to the creation of a line of pallet rack, drive in/drive thru, mezzanines, quick assembly bulk storage, and cantilever rack, thus laying the foundation for the future of the material handling industry. Interlake also diversifies through acquisition to add tubular steel furniture, steel kitchen cabinets, plywood cores for counter tops, and other furniture parts. 1956 Meanwhile, Acme continues to prosper and purchases Newport Steel Corporation.That subsidiary becomes Acme Newport Steel Company, dedicated to producing steel through the melting of scrap and pig iron in open furnaces. 1961 Acme is now able to reach a greater cross-section of the hot rolled strip steel market by producing its own materials. The company also adds a slitting, heat treating, and painting line. 1963 Ground is broken for the construction of a new plant in Pontiac, Illinois. Production begins for pallet rack and flexible conduit. 1964 Interlake Iron Company merges with Acme Steel Company to form Interlake Steel Corporation, establishing the 11th largest completely integrated steel company in the United States. The new company completes its first steel storage rack plant in Pontiac, Illinois - still the world's largest rack manufacturing plant at 415,000 square feet of manufacturing space. 1969 Lodi, California rack manufacturing plant is acquired. The Lodi plant continued to produce storage rack for 34 years until it was closed in 2003. 1970 Interlake Steel Corporation merged into Interlake, Inc., in order to change its domicile from New York to Delaware. 1974 Interlake, Inc. acquires Dexion Comino, Ltd. Of England, creating global storage rack capabilities extending to Europe and Australia. Dexion was subsequently spun off by The Interlake Corporation in 1997. 1986 The new Interlake Corporation is incorporated in February 1986. In May 1986, The Interlake Corporation, including The Interlake Companies, Inc.'s Material Handling Division as well as several other business ventures, is listed on the New York Stock Exchange. The old Interlake, Inc. changes its name to Acme Steel Company and continues operating the old iron and steel division, and transfers all other businesses to the new Interlake. In June 1986, Acme Steel Company is spun off as a separate publicly traded corporation. 1988 Interlake's Sumter, South Carolina rack manufacturing plant is built. 1997 Interlake Material Handling, Inc. is created and is still today the corporation that conducts the Interlake material handling business. 1999 Interlake Corporation is acquired by GKN plc based in London. GKN has several joint ventures with the Sydney, Australia-based Brambles Companies 2001 A new Brambles company, operating in a dual-listed companies (DLC) structure, is formed from the GKN/Brambles partnership. Brambles Industries Limited, listed in Australia, ranks among the top 20 companies in the Australian Stock Exchange's All Ordinaries index. Brambles Industries plc is listed on the London Stock Exchange and ranks in the FTSE 100 index of leading industrial companies in the UK. Interlake Material Handling, Inc. becomes part of Brambles Industries Limited. Also in 2001, Interlake builds and opens a rack manufacturing plant in Matamoros, Mexico, setting the stage for additional international opportunities. History from Wikipedia and OldCompany.com. About Specimens Specimen Certificates are actual certificates that have never been issued. They were usually kept by the printers in their permanent archives as their only example of a particular certificate. Sometimes you will see a hand stamp on the certificate that says "Do not remove from file". Specimens were also used to show prospective clients different types of certificate designs that were available. Specimen certificates are usually much scarcer than issued certificates. In fact, many times they are the only way to get a certificate for a particular company because the issued certificates were redeemed and destroyed. In a few instances, Specimen certificates we made for a company but were never used because a different design was chosen by the company. These certificates are normally stamped "Specimen" or they have small holes spelling the word specimen. Most of the time they don't have a serial number, or they have a serial number of 00000. This is an exciting sector of the hobby that grown in popularity over the past several years.