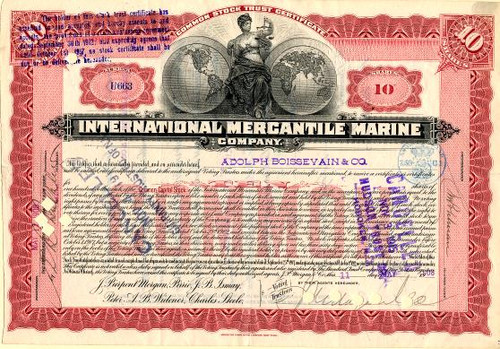 Beautifully engraved SCARCE certificate from the International Mercantile Marine Company issued in 1908. This historic document was printed by American Bank Note Company and has an ornate border around it with a vignette of an allegorical lady between two globes. This item has the signatures of the Company's Agent and is over 98 years old. The certificate has the names of the Voting Trustees printed on the face. The names are J. P. Morgan, W. J. Pirrie, J. Bruce Ismay, Peter A. B. Widener and Charles Steele. Pre Titanic sinking certificates with the Trustees' names printed on the front are very hard to find.

Certificate Vignette
The International Mercantile Marine shipping trust was formed in 1902 by J.P. Morgan. This company controlled the White Star Line which constructed three sister ships the Olympic, Titanic, and Britannic which are depicted in the unique, nautical vignette. Each of these ships was identical in size being 882 1/2 feet long and 92 1/2 feet wide. The Titanic sunk on its maiden voyage on April 15, 1912, after striking an iceberg at 11 20 p.m. on April 14,1912. 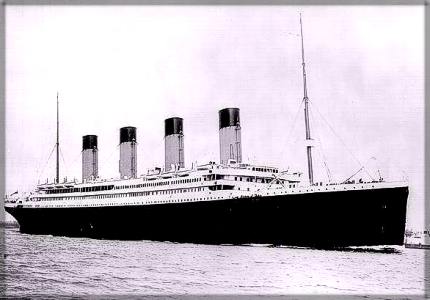