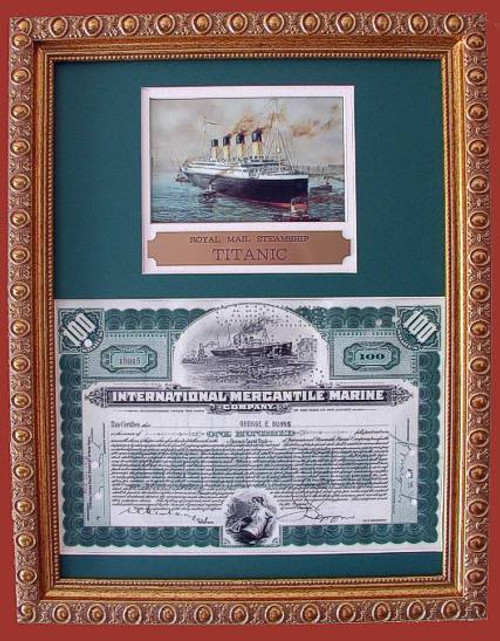 International Mercantile Marine was a huge shipping trust formed in 1902 by J.P. Morgan. This company controlled the White Star Line which constructed three sister ships, the Olympic, Titanic, and Britannic, which are depicted in the top nautical vignette. The lower vignette features a lady in a nautical setting. Each of these three ships was identical in size being 882 1/2 feet long and 92 1/2 feet wide. The Titanic, which sank on its maiden voyage on April 15, 1912, after striking an iceburg at 11:40 p.m. on April 14, 1912, is perhaps the most famous ship of the 20th century. These green stock certificates were issued for 100 shares to an individual or company in the 1920s or earlier and are in excellent condition. These certificates are hand signed by the company's officers and are over 80 years old. Small punch holes in the certificate are common and represent redemption and cancellation of the certificates. Featured over the stock certificate is a majestic image of an oil painting of the Titanic titled 'Titanic leaving Southampton' by E.D. Walker of England. Walker is the official artist of the RMS Titanic Exhibition which features actual artifacts recovered from the Titanic. Under the ship's image is an engraved brass plate titled "Royal Mail Steamship Titanic." The certificate is framed in an antique gold classic frame with 1 1/4" wood moulding. The overall frame size is 14 1/4" x 18 1/4". Archival mounting, acid free backing, double matting, and clear glass are used in preparing the framed certificate. The price of $189.95 includes the historic certificate , framing as described above, labor, heavy duty packaging, and USPS priority mailing in the continental U.S. Mailing to Alaska, Hawaii, and international destinations is available at actual cost.