Historic check from the American Play Company written to Ira Gershwin issued in 1957. This item is over 50 years old. The check is encapsulated and authenticated by the PSA/DNA. 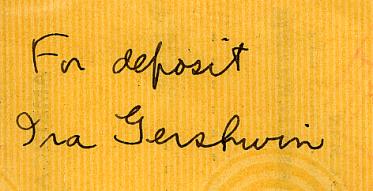 Certificate Vignette
Ira Gershwin (6 December 1896 17 August 1983) was an American lyricist who collaborated with his younger brother, composer George Gershwin, to create some of the most memorable songs of the 20th century. With George he wrote more than a dozen Broadway shows, featuring songs such as "I Got Rhythm," "Embraceable You," "The Man I Love" and "Someone to Watch Over Me," and the opera Porgy and Bess. The success the brothers had with their collaborative works has often overshadowed the creative role that Ira played. However, his mastery of songwriting continued after the early death of George; and he wrote further hit songs with composers Jerome Kern ("Long Ago (And Far Away)", Kurt Weill and Harold Arlen. His critically-acclaimed book Lyrics on Several Occasions of 1959, an amalgam of autobiography and annotated anthology, is an important source for studying the art of the lyricist in the golden age of American popular song. Ira Gershwin (born Israel Gershowitz) was reportedly shy as a young boy and spent most of his time at home reading. However, from grammar school through college he played a prominent part in several school newspapers and magazines. He graduated from Townsend Harris High School where he met Yip Harburg. While his younger brother began composing and "plugging" in Tin Pan Alley from the age of sixteen, Ira worked as a cashier in his father's Turkish baths. It was not until 1921 that Ira became involved in the music business. Alex Aarons signed Ira to write the music for his next show (ultimately produced by Abraham Erlanger), Two Little Girls in Blue, with co-composers Vincent Youmans and Paul Lannin. His lyrics were well received and allowed him to successfully enter the theatre world with just one show. It wasn't until 1924 that Ira and George teamed up to write the music for their first Broadway hit, Lady, Be Good! Once the brothers joined together, their combined talents became one of the most influential forces in the history of American Musical Theatre. Together, they wrote the music for over twelve shows and four films. Some of their more famous works include "The Man I Love", "Fascinating Rhythm", "Someone to Watch Over Me", "I Got Rhythm" "Summertime" and "They Can't Take That Away from Me". Their partnership continued up until George's sudden death from a brain tumor in 1937. Following his brother's death, Ira waited nearly three years before writing again. After this interlude, he teamed up with such accomplished composers as Jerome Kern, Kurt Weill, and Harold Arlen. Over the next fourteen years, Ira continued to write the lyrics for many film scores and a few Broadway shows. Ira died on August 17, 1983, and is now interred in the Westchester Hills Cemetery, Hastings-on-Hudson, New York. Together, the Gershwin siblings left behind a legacy that would help shape American Musical Theatre. Solely, Ira played a huge part in bringing about a new type of song lyric: a smart, witty, vernacular style that the common man could relate to and enjoy. American singer, pianist, musical historian Michael Feinstein worked for Ira in the lyricist's latter years, helping him with his archive. Several lost musical treasures were unearthed during this period and Feinstein performed some of the material. The music of George and Ira Gershwin runs deep in the American consciousness. The opening clarinet glissando from Rhapsody in Blue, the taxi horn theme from An American in Paris and the songs -- "I Got Rhythm," "Embraceable You," "The Man I Love," "Someone to Watch Over Me," "Fascinating Rhythm," and many others -- are instantly recognizable. Ira Gershwin was a joyous listener to the sounds of the modern world. He noted in a diary: "Heard in a day: An elevator's purr, telephone's ring, telephone's buzz, a baby's moans, a shout of delight, a screech from a `flat wheel,' hoarse honks, a hoarse voice, a tinkle, a match scratch on sandpaper, a deep resounding boom of dynamiting in the impending subway, iron hooks on the gutter." History from Wikipeida and OldCompanyResearch.com.