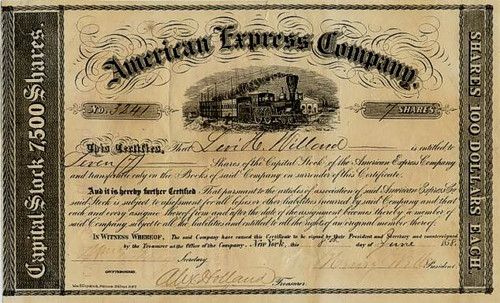 Beautifully engraved certificate from the American Express Company issued in 1858. This historic document was printed by John H. Duyckinck, Stationer and has an ornate border around it with a vignette of steam engine passing telegraph lines. This item is hand signed by the Company's President ( Henry Wells ) and Secretary ( William Fargo ) and Treasurer ( Alex Holland ) and is over 147 years old.

Henry Wells Signature
William Fargo could envision the future better than most men of his time. The co-founder of Wells, Fargo & Co., he saw the nation's approaching need for better shipping and transportation systems. For improved communications. For faster delivery of news. So he made it his job to bring the country closer together. The eldest of twelve children, William Fargo was born in Pompey, New York. As a boy he worked on his father's farm and attended school in the winter. At thirteen -- as a mail carrier in his home town --he had already started working toward his goals. In the 1841 Fargo became the first freight agent of Auburn, New York. His business abilities attracted the attention of Henry Wells -- the owner of the express service -- who hired him. William Fargo served as a messenger with Wells & Company, and eventually became Wells' partner. In 1850, Wells & Company joined with two other express companies to form the American Express Company which covered the eastern sector of the United States, with the western sector being covered by Wells, Fargo and Company. Both men helped organize the American Express Company. And Fargo served as the company's president from 1868 until his death. After the discovery of gold in California Wells and Fargo saw the desperate need of Westerners for expanded banking and express facilities. American Express was happy to stay in the East. So Fargo made his historic decision with Wells to found Wells Fargo & Co.-- a company that was soon busy buying gold dust, selling drafts and doing a general banking and express business. The two entrepreneurs also built a stagecoaching empire that spanned the West. In fact, in 1863 Fargo came to California overland by stagecoach. He made good use of his stay. While in the Golden State, Fargo worked with the Sacramento Valley Railroad in an attempt to build a railroad across the Sierra Nevada. He also laid the foundation for the Grand Consolidation of 1866 that gave Wells Fargo responsibility for all overland staging west of the Missouri River. President of Wells, Fargo & Co. from 1870 to 1872, Fargo never lost interest in people and the need to communicate. He was the Democratic mayor of Buffalo during the Civil War and a director of the Northern Pacific Railroad, which named one of their railroad towns for him -- Fargo, North Dakota. Alexander Holland was the son-in-law of the third founder, John Butterfield.