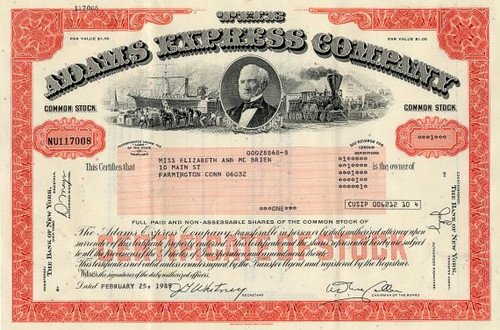 Beautiful uncancelled certificate from the Adams Express Company issued no later than 1994. This historic document was printed by American Banknote Company and has an ornate border around it with a vignette of a steam locomotive, a ship next to a dock, and the company founder. This item has the printed signatures of the Company's Officers.

Certificate Vignette
The Adams Express Company had its beginnings in 1840, when a young entrepreneur, Alvin Adams, recognized the need for the safe transportation of securities, documents, and parcels between the financial centers of Boston and New York. The operation was incorporated in 1854 and rapidly expanded across the country. It soon became one of the three principal express companies in the United States, the others being Wells, Fargo & Co. and American Express. Adams Express played a significant role in the Civil War and acted as the paymaster for both the Union and Confederate armies until, in response to complaints about this, it set up a separate company, Southern Express, to handle the payments to Southern troops. In addition, at least one slave was shipped north to Philadelphia in a box in order for his master to free him. By the 1880s, the Company had nearly 8,000 employees, was operating over 20,000 miles of railroad track, and had offices all around the United States and in most of the major cities in Europe. In 1913, the United States enacted the Parcel Post law, which enabled the U. S. mail system to carry small packages as ordinary mail, which was a serious blow to the express companies' profitability. During the First World War, the government nationalized both the railroads and the express companies in order to expedite the movement of goods around the country. After the war, the railroad industry took a strong interest in the delivery business and bought out the express companies. The Board of Managers of Adams Express had invested a large percentage of the Company's profits in an equity portfolio over the years and decided after the sale of the express business to the railroads that the Company should be operated as an investment company. The ancillary operations of the Company, including its travelers' check business and a resort on the New Jersey coast known as "Hollywood," were sold off. In October 1929, just before the stock market crash, Adams Express was structured as a closed-end fund and management invested the approximately $62 million in proceeds from the sales of all the operations in the stock market. At the time, there were over five hundred closed-end funds, representing the principal way for individual investors to participate in the stock market. Forty-six funds survived the Great Depression; six of those are still in operation, including Adams Express and Petroleum & Resources Corporation, their sister company. The Company's shares have been publicly traded since 1873, and were formally listed on the New York Stock Exchange in the early 1900s. Except for the years 1867, 1869, and the depression years 1932-1935, the Company has paid dividends in every year since 1854. In 1976, the Company moved its operations from New York to Baltimore. Today, the Company has in excess of $2 billion in net assets and employs a staff of twenty people, comprised of its own team of research analysts, portfolio managers, and administrative personnel.