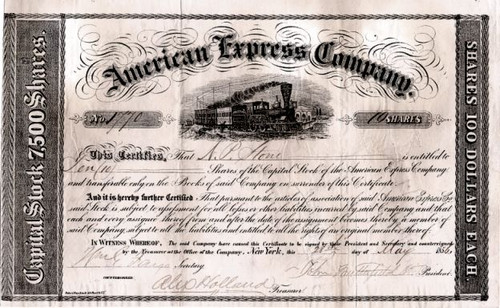 Beautiful stock certificate from the American Express Company issued on May 28, 1856. This historic document was printed by Baker and Duyckinck Stationer and has an ornate border around it with a vignette a steam locomotive facing right passing telegraph poles. This item is hand signed by the Company's Vice President (John Butterfield ) and Secretary ( William Fargo ) and Treasurer ( Alex Holland ). This item is over 151 years old. John Butterfield's signature on these certificates is highly desirable and hard to find. Light toning and overall in EF+ condition. Type II American Express Certificate with one of the earliest dates.

William Fargo and Alex Holland Signatures
William Fargo could envision the future better than most men of his time. The co-founder of Wells, Fargo & Co., he saw the nation's approaching need for better shipping and transportation systems. For improved communications. For faster delivery of news. So he made it his job to bring the country closer together. The eldest of twelve children, William Fargo was born in Pompey, New York. As a boy he worked on his father's farm and attended school in the winter. At thirteen -- as a mail carrier in his home town --he had already started working toward his goals. In the 1841 Fargo became the first freight agent of Auburn, New York. His business abilities attracted the attention of Henry Wells -- the owner of the express service -- who hired him. William Fargo served as a messenger with Wells & Company, and eventually became Wells' partner. In 1850, Wells & Company joined with two other express companies to form the American Express Company which covered the eastern sector of the United States, with the western sector being covered by Wells, Fargo and Company. Both men helped organize the American Express Company. And Fargo served as the company's president from 1868 until his death. After the discovery of gold in California Wells and Fargo saw the desperate need of Westerners for expanded banking and express facilities. American Express was happy to stay in the East. So Fargo made his historic decision with Wells to found Wells Fargo & Co.-- a company that was soon busy buying gold dust, selling drafts and doing a general banking and express business. The two entrepreneurs also built a stagecoaching empire that spanned the West. In fact, in 1863 Fargo came to California overland by stagecoach. He made good use of his stay. While in the Golden State, Fargo worked with the Sacramento Valley Railroad in an attempt to build a railroad across the Sierra Nevada. He also laid the foundation for the Grand Consolidation of 1866 that gave Wells Fargo responsibility for all overland staging west of the Missouri River. President of Wells, Fargo & Co. from 1870 to 1872, Fargo never lost interest in people and the need to communicate. He was the Democratic mayor of Buffalo during the Civil War and a director of the Northern Pacific Railroad, which named one of their railroad towns for him -- Fargo, North Dakota. John Butterfield was born in Berne, New York in 1801 and grew up on a farm amidst the technological revolution of the first steamboat, the Erie Canal, the steam locomotive and the electric telegraph. In 1850, Butterfield convinced Henry Wells and William Fargo to consolidate their express companies with his own Butterfield & Wasson Company to form the American Express Company, which Butterfield then directed. Although the original American Express Company was primarily an express-transportation company, it is today a worldwide organization based in New York City, providing travel-related and insurance services, as well as international finance operations and banking. In 1857, John Butterfield won a $600,000 contract to deliver the St. Louis mail to San Francisco in 25 days. This contract, the largest for land mail service that had yet been given, was awarded to Butterfield's Overland Stage Company after 9 groups had entered bids. Butterfield immediately hired crews to prepare stations along the 2,000-mile route and water storage tanks every 30 miles, because as he said, "Remember boys, nothing on God's earth must stop the mail!" The Overland Mail continued to make two trips a week for 2 1/2 years. Each Monday and Thursday morning the stagecoach would leave Tipton and San Francisco on their transcontinental journey, conveying passengers freight and up to 12,000 letters. The western fare one-way was $200, with most stages arriving at their final destination 22 days later. While it prospered, the Butterfield Overland Stage Company employed more than 800 people and had 139 relay stations, 1800 head of stock and 250 Concord Stagecoaches in service at one time. In March of 1860, John Butterfield was forced out, and the Butterfield Overland Stage Company was taken over by Wells, Fargo & Company due to large debts that Butterfield owed to Wells and Fargo. At age 59. John Butterfield retired to his home in Utica, New York, where he later suffered a paralyzing stroke and died in 1869. He had established an incredible mail route, the longest in the world at the time, which provided a regular line of communication for Americans separated by almost 2,000 miles of hot, dry, rugged desert wilderness. Alexander Holland, the son-in-law of John Butterfield.