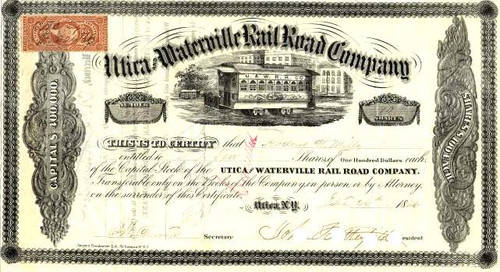 Beautifully engraved certificate from the Utica and Waterville Rail Road Company issued in 1866. This historic document was printed by Jacques Sandmeyer, Lithographer, and has an ornate border around it with a vignette of a street railway car. This item is hand signed by the Company's President ( JOHN BUTTERFIELD ) and Secretary and is over 138 years old. Punch cancelled through signature. EF condition.

Certificate Vignette
John Butterfield 180169, American stagecoach proprietor and expressman, b. near Albany, N.Y. Beginning as a stage driver out of Albany, he rose to ownership of a large network of stage lines. He helped to merge his express company with others to form (1850) the American Express Company. In 1857, when Congress established the overland mail route to Los Angeles, Butterfield was awarded the mail contract. He organized the service on the 2,800-mi (4,500-km) southern route efficiently and continued it until 1861, when the stages were moved to the central route. He also promoted the development of telegraph lines and railroads. He was the founder of the Utica and Waterville Rail Road Company. John moved to Utica, New York. In 1865 he became the mayor of Utica. He died in 1869. He was 59. John Butterfield established the longest mail route in the world at that time.