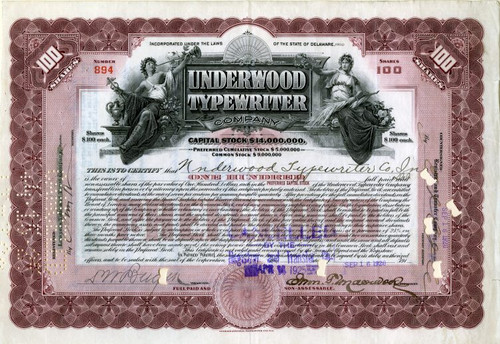 Beautifully engraved certificate from the Underwood Typewriter Company This historic document was printed by the International Banknote Company and has an ornate border around it with a vignette of 2 allegorical women flanking the company's name. This item has the signatures of the Company's President, John T. Underwood and Secretary, Dewitt Bergen, and is over 100 years old. 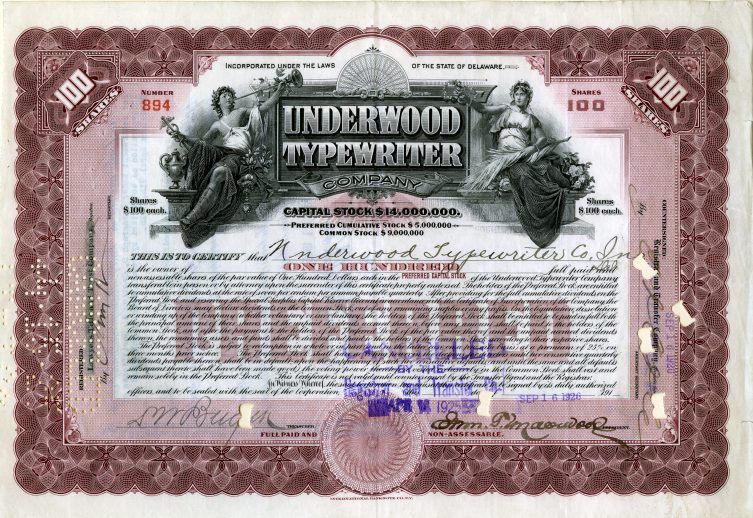 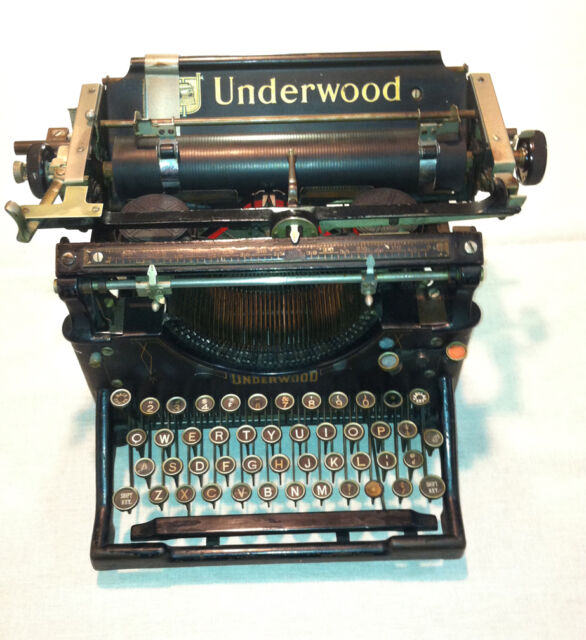 Old Underwood Typewriter shown for illustrative purposes
John Thomas Underwood (April 12, 1857 in London, England July 2, 1937 in Osterville, Massachusetts) was an American entrepreneur and inventor who founded the Underwood Typewriter Company. The Underwood Typewriter Company was a manufacturer of typewriters headquartered in New York City, New York. Underwood produced what is considered the first widely successful, modern typewriter. By 1939, Underwood had produced five million machines. From 1874, the Underwood family made typewriter ribbon and carbon paper, and were among a number of firms who produced these goods for Remington. When Remington decided to start producing ribbons themselves, the Underwoods opted to manufacture typewriters. The original Underwood typewriter was invented by German-American Franz Xaver Wagner, who showed it to entrepreneur John Thomas Underwood. Underwood supported Wagner and bought the company, recognizing the importance of the machine. Underwood No. 1 and No. 2s, made between 1896 and 1900, had "Wagner Typewriter Co." printed on the back. The Underwood No. 5 launched in 1900 has been described as "the first truly modern typewriter". Two million had been sold by the early 1920s, and its sales "were equal in quantity to all of the other firms in the typewriter industry combined". When the company was in its heyday as the world's largest typewriter manufacturer, its factory at Hartford, Connecticut was turning out typewriters at the rate of one each minute. Underwood started adding addition and subtraction devices to their typewriters in about 1910. Philip Dakin Wagoner was appointed president of the Elliott-Fisher Company after World War I (1914-1918). Elliott-Fisher became the parent of the Underwood Typewriter Company and the Sundstrand Adding Machine Co. In 1927 Wagoner reorganized the company into Underwood-Elliott-Fisher, which later became the Underwood Corporation. The reorganization was completed in December 1927. John Thomas Underwood was elected chairman and Wagoner president of Underwood Elliott-Fisher. In the years before World War II, Underwood built the world's largest type writer in an attempt to promote itself. The typewriter was on display at Garden Pier in Atlantic City, New Jersey for several years and attracted large crowds. Often, Underwood would have a young woman sitting on each of the large keys. The enormous typewriter was scrapped for metal when the war started. During World War II Underwood produced M1 carbines. Approximately 540,000 M1 Carbines were produced from late 1942 to May of 1944. Underwood also produced M1 Carbine barrels for the US Government under the Free-Barrel Program were barrels were sent to other prime manufacturers who did not possess the machines to make barrels. It is thought that they made about 1 million barrels from late 1942 to late 1944. During the post-war period they were one of two civilian companies who were awarded a contract to refurbish M1 Carbines. They were first to produce stamped and brazed parts by producing trigger housings and front sights reducing time and machines for complex work during milling operations. In 1945 Wagoner was elected chairman of the board of Underwood, and Leon C. Stowell was elected president. Wagoner remained chief executive. Olivetti bought a controlling interest in Underwood in 1959, and completed the merger in October 1963, becoming known in the US as Olivetti-Underwood with headquarters in New York City, and entering the electro mechanical calculator business. The Underwood name last appeared on Olivetti portable typewriters produced in Spain in the 1980s. History from Wikipedia and OldCompany.com (old stock certificate research service)