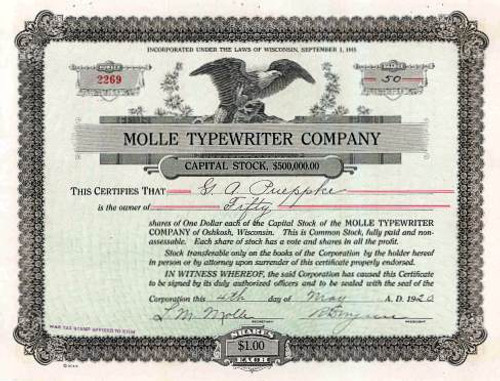 Beautifully engraved certificate from the Molle Typewriter Company issued in 1920. This historic document has an ornate border around it with a vignette of an eagle. This item is hand signed by the Company's President and Secretary and is over 82 years old. 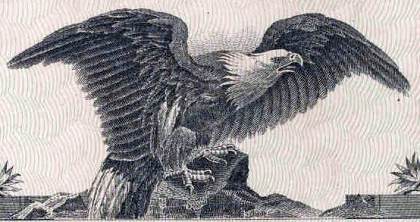 Certificate Vignette
According to newspaper clippings, John E. Molle was born in Kewaunee, Wisconsin on April 27, 1876. He died at 45 years of age, in 1921. He and his family had been in the jewelry business since emigrating from their native Germany. John Molle joined the family business, probably in the 1890s and worked as a jeweller and watch maker. He found himself confronted regularly with clients asking him to repair typewriters. Being the only repairman for 100 miles around, Molle handled quite a few of them. He was frustrated by their complicated designs and finally set out to produce a machine of his own. Patents On Feb 27, 1906, John E. Molle of Sturgeon Bay, WI, was granted his first patent on a typewriter. It is a goofy looking machine at first glance, but (pic 2) on closer inspection it appears as a visible concept only lacking a traditional platen or movable carriage. (Keep in mind that this was a patent model.) This would appear to be the machine that some contemporary sources call the Jundt and list the date of introduction as 1908. The machine is interesting due to the fact that at this early date (1906) a visible typebar design was still a cutting-edge idea. Bear in mind that Remington was still selling "blind machines" as late as 1914. Also, this first patent drawing shows that the Molle is a repairman's dream. Within seconds the entire type basket could be lifted out of the machine for repairs. The machine that would finally be built could be split up in three pieces (frame, basket and carriage) within a minute. Molle's next patent (pic 3) was issued on December 16, 1913. This one was for a "Line spacing mechanism for Type-Writers". It would seem that Mr. Molle figured out by then that he could sell more typewriters if they had a platen, a carriage, and a line-space mechanism. The next available patent is dated Dec 23, 1913 and appears to be the one for the machine that is now known as the Molle No.3. (No evidence exists of a Molle 1 or 2 ever having been produced.) The fourth and final patent was granted Jan. 13, 1914 for an escapement mechanism. The different patent specifications clearly show that Molle was concerned about making a machine that was both rugged and easy to service: "This invention relates to Type-writing machines and is designed to obtain in a simple and effective manner a prompt and positive response of the typebars and to effect cushioning of the key-action, so as to prevent breaking of any of the parts thereof, should the action become jammed in any matter and at the same time to cushion the depression of the keys and thereby prevent the sudden jar upon the fingers of the operator as is usual with ordinary forms of typewriting machines when the type strikes the platen." Decline and fall of the Molle empire Based on contemporary papers (letters, records and clippings) it seems that Molle tried to set up a typewriter factory in Manitowoc, WI, in 1909. However, it would take at least six more years until the Molle company finally came off the ground. But the machine never flew. The Molle typewriter company was seriously hindered by World War I, when the US government had other priorities. On Sep 15, 1919, John Molle reported to his stock holders how he had been in a position to sell 20,000 of his typewriters to the government in 1918. However, the deal fell through because the factory wasn't ready to produce yet. And when he finally received orders for 275 machines, he had to go before the Priorities Committee to secure the necessary raw materials. Production The rest of the story is equally sad. In 1919, production is taken up in a factory in Oshkosh, WI, and more than 1,000 machines are produced and delivered. The company goes public and raises more than half a million dollars in capital, with 5 dollar shares (pic 4). Production increases to more than 500 machines per month, but sales falter. John Molle falls ill and dies on Apr 27, 1921 in Oshkosh, at age 45. The company does not survive much longer and is declared bankrupt in March 1922. Shortly after, production of the Molle is taken up under the name Liberty by a company in Chicago, but only for a very short while. In all, less than 10,000 Molle typewriters were built between 1918 and 1922. Only about 50 are known to have survived and are now in different collections. History is from the Virtual Typewriter Museum.