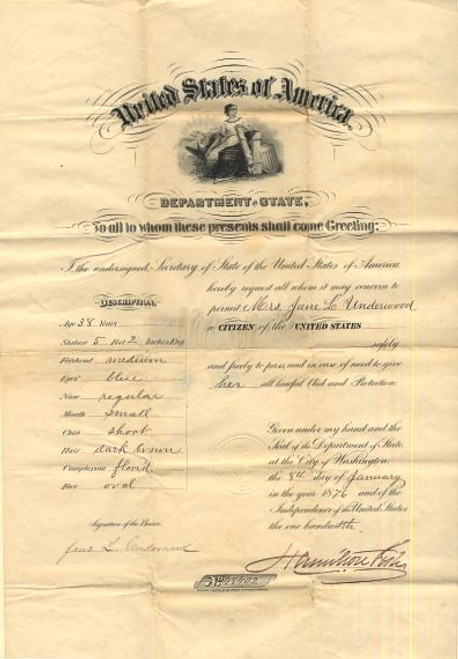 Passport issued from the Department of State to Jane L. Underwood, wife of Civil War General, Adin Ballou Underwood in 1876. This historic document was printed by the Bureau of Engraving & Printing Company and has a vignette of a woman sitting next to an eagle and a seal. This item has the signature of Hamilton Fish, as Secretary of State and is also signed by Jane L. Underwood. This passport numbered 48,402 is over 133 years old. Small residue on back where attached to passport book. Jane Lydia Walker married Adin Ballou Underwood on 5 June 1856. 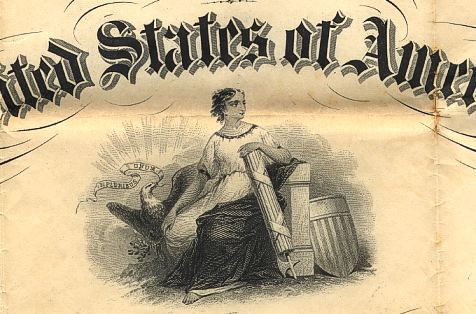 Certificate Vignette
Hamilton Fish 26th United States Secretary of State In office March 17, 1869 March 12, 1877 Preceded by Elihu B. Washburne Succeeded by William M. Evarts 16th Governor of New York In office January 1, 1849 December 31, 1850 Lieutenant George Washington Patterson Preceded by John Young Succeeded by Washington Hunt Born August 3, 1808(1808-08-03) New York City, New York Died September 7, 1893 (aged 85) Garrison, New York Political party Whig, Republican Spouse Julia Kean Fish Alma mater Columbia College of Columbia University Profession Politician, Lawyer Religion Episcopalian Hamilton Fish (August 3, 1808 September 7, 1893), born in New York City, was an American statesman who served as Governor of New York, United States Senator and United States Secretary of State. Fish was born at what is now known as the Stuyvesant-Fish House in Greenwich Village, New York City, to Nicholas Fish and Elizabeth Stuyvesant (a great-great-granddaughter of New Amsterdam's Peter Stuyvesant), and his parents named him after their friend Alexander Hamilton. Nicholas Fish (1758-1833) was a leading Federalist politician and notable figure of the American Revolutionary War. Hamilton Fish married Julia Kean (a descendant of a New Yorker who was a New Jersey governor, William Livingston) in 1836. They would have three sons and five daughters, and multiple notable relatives. Hamilton graduated from Columbia College in 1827 and was admitted to the New York bar in 1830, practicing briefly with William Beach Lawrence. He served as commissioner of deeds for the city and county of New York from 1832 through 1833, and was an unsuccessful candidate for New York State Assembly in 1834. As a member of the Whig party, Fish was elected to the House of Representatives, defeating Democrat John McKeon and serving in the 28th Congress from New York's 6th District between 1843 and 1845. After losing his bid for re-election, he returned to private practice as a lawyer. He was the Whig candidate for lieutenant governor of New York in 1846, but was defeated by Democrat Addison Gardiner who had been endorsed by the Anti-Rent Party. In 1847, however, after Gardiner was elected a judge of the New York Court of Appeals, Fish was elected (November 1847) to complete the term (until December 31, 1848). He was elected Governor of New York in 1848, defeating John A. Dix and Reuben H. Walworth, and served from January 1, 1849 through December 31, 1850. He was elected to the United States Senate defeating the incumbent Daniel S. Dickinson, and began serving on March 4, 1851. There he was a member of the U.S. Senate Committee on Foreign Relations until the end of his term on 3 March 1857. He was a Republican for the latter part of his term and was part of a moderately anti-slavery faction. He opposed the repeal of the Missouri Compromise. At the expiration of his term, he traveled with his family to Europe and remained there until shortly before the opening of the American Civil War, when he returned to begin actively campaigning for the election of Abraham Lincoln. In 1861 and 1862 he was associated with John A. Dix, William M. Evarts, William E. Dodge, A.T. Stewart, John Jacob Astor and other New York men on the Union Defence Committee, which (from April 22, 1861 to April 30, 1862) cooperated with the New York City government in the raising and equipping troops, and disbursed more than $1 million for the relief of New York volunteers and their families. He was also appointed in 1862 to serve with Edward Raymond Ames to visit the Union Army prisoners being held in the Confederate States of America capital in Richmond, Virginia. The Confederate government, however, refused to allow the commission to enter the city. Hamilton Fish in his elder years.He also served as Secretary of State between March 17, 1869 and March 12, 1877 under Ulysses S. Grant. He was Grant's longest-serving Cabinet officer. He conducted the negotiations with Great Britain which resulted in the Treaty of Washington of 1871, under which the Alabama claims and the San Juan Boundary Dispute (concerning the Oregon boundary line) were referred to arbitration. He also negotiated the reciprocity treaty of 1875 with the Kingdom of Hawaii. In 1871 Fish presided at the peace conference at Washington between Spain and the allied republics of Peru, Chile, Ecuador and Bolivia, which resulted in a general truce between those countries. It was chiefly due to his restraint and moderation that a satisfactory settlement of the Virginius Affair was reached by the United States and Spain in 1873. Within the Department of State, he promoted testing job applicants to see if they were truly qualified for duty at a consulate. After leaving the Cabinet, he returned to the law and managing his real estate in New York City. He died at Glen Clyffe, his estate near Garrison, New York, in Putnam County, New York, in the Hudson River Valley, and is buried in Garrison at St. Philip's Church-in-the-Highlands Cemetery. Adin Ballou Underwood UNDERWOOD, Adin Ballou, soldier, born in Milford, Massachusetts, 19 May, 1828 ; died in Boston, Massachusetts, 14 January, 1888. His ancestors came to Hingham before 1637 and afterward settled in Watertown. His father, Orison, was a brigadier-general of militia. After graduation at Brown in 1849 the son studied law at Harvard, was admitted to the bar in 1853, and settled in Boston in 1855. At the beginning of the civil war he was active in raising recruits, and he was appointed captain in the 2d Massachusetts infantry in April, 1861. He became major in the 33d regiment in July, 1862, lieutenant-colonel and colonel in the same year, participated in the battles of Fredericksburg, Chancellorsville, and Gettysburg, and served under General Joseph Hooker at Lookout Mountain, but, being dangerously wounded, was disabled from further field duty. He was appointed brigadier-general of volunteers on 13 January, 1863, received the brevet of major-general of volunteers on 13 August, 1865, and was mustered out on 10 July, 1866. For nearly twenty years he was surveyor of the port of Boston. General Underwood published "Three Years' Service of the Twenty-third Massachusetts Infantry" (Boston, 1881). History from Wikipedia and OldCompany.com (old stock certificate research service).