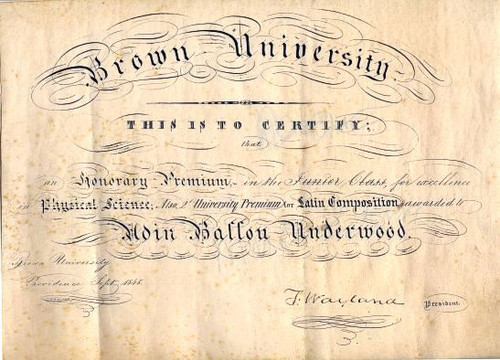 Honary Premium Certificate from Brown University issued to Adin Ballou Underwood for Excellence 1848. The certificate was issued for an Honary Premium for excellence in Physical Science and a University Premium for Latin Composition. This item has the signature of the University's President, F. Wayland and is over 161 years old. Adin Ballou Underwood, soldier, born in Milford, Massachusetts, 19 May, 1828 ; died in Boston, Massachusetts, 14 January, 1888. His ancestors came to Hingham before 1637 and afterward settled in Watertown. His father, Orison, was a brigadier-general of militia. After graduation at Brown in 1849 the son studied law at Harvard, was admitted to the bar in 1853, and settled in Boston in 1855. At the beginning of the civil war he was active in raising recruits, and he was appointed captain in the 2d Massachusetts infantry in April, 1861. He became major in the 33d regiment in July, 1862, lieutenant-colonel and colonel in the same year, participated in the battles of Fredericksburg, Chancellorsville, and Gettysburg, and served under General Joseph Hooker at Lookout Mountain, but, being dangerously wounded, was disabled from further field duty. He was appointed brigadier-general of volunteers on 13 January, 1863, received the brevet of major-general of volunteers on 13 August, 1865, and was mustered out on 10 July, 1866. For nearly twenty years he was surveyor of the port of Boston. General Underwood published "Three Years' Service of the Twenty-third Massachusetts Infantry" (Boston, 1881). Francis Wayland (March 7, 1796 September 30, 1865), American Baptist educator, was born in New York City. In Washington, D.C., Wayland Seminary was established in 1867 and was named in his honor. (In 1899, Wayland Seminary merged with another school to become the current Virginia Union University at Richmond, Virginia.) Francis Wayland's father was an Englishman of the same name, who was also a Baptist pastor. The son graduated at Union College in 1813 and studied medicine in Troy and in New York City, but in 1816 entered Andover Theological Seminary, where he was greatly influenced by Moses Stuart. He was too poor to conclude his course in theology, and in 1817-1821 was a tutor at Union College, to which after five years as pastor of the First Baptist Church of Boston he returned in 1826 as professor of natural philosophy. He was one of the founders of Newton Theological Institution in 1825. In 1827 he became president of Brown University. In the twenty-eight years of his administration he gradually built up the college, improving academic discipline, formed a library and gave scientific studies a more prominent place. He also worked for higher educational ideals outside the college, writing text-books on ethics and economics, and promoting the free school system of Rhode Island and especially (1828) of Providence. His Thoughts on the Present Collegiate System in the United States (1842) and his Report to the Corporation of Brown University of 1850 pointed the way to educational reforms, particularly the introduction of industrial courses, which were only partially adopted in his lifetime. He resigned the presidency of Brown in 1855, and in 1857-1858 was pastor of the First Baptist Church of Providence. He was an early advocate of the temperance and anti-slavery causes, for many years was "inspector of the state prison and Providence county jail," president of the Prison Discipline Society, and active in prison reform and local charities. He was one of the "law and order" leaders during the "Dorr Rebellion" of 1842, and was called "the first citizen of Rhode Island." Wayland was a long time vocal advocate for libraries. His donation to the town of Wayland, Massachusetts in 1851 for the establishment of a public library was the catalyst for legislation in Massachusetts allowing towns to establish libraries. His son Francis Wayland III (1826-1904), was lieutenant-governor of Connecticut from 1869-1870, and became a professor and Dean of the Yale Law School. Brown University is a private university located in Providence, Rhode Island, United States and is a member of the Ivy League. Founded in 1764 as the College of Rhode Island, it is the third-oldest institution of higher education in New England and seventh oldest in the United States. Pembroke College (Brown University), Brown's all women's college, merged with the College in 1971. Brown was the first college in the nation to accept students regardless of religious affiliations. The school also has the oldest undergraduate engineering program in the Ivy League (1847). The Brown "New Curriculum," instituted in 1969, eliminates distribution requirements and mandatory A/B/C grades (allowing any course to be taken on a "satisfactory/no credit" basis). Moreover, there are no pluses (+), minuses (-), or grades of D in the grading system. Since 2001, Brown's 18th president has been Ruth J. Simmons, the first African American and second female president of an Ivy League institution, as well as the first permanent female president of Brown. The school colors are seal brown, cardinal red, and white. Brown's mascot is the bear and the varsity sports teams are called the Brown Bears. The costumed bear mascot named "Bruno" makes appearances at athletic games. The use of a bear as the University's mascot dates back to 1904. People associated with the University are known as Brunonians. History from Wikipedia and OldCompany.com (old stock certificate research service).