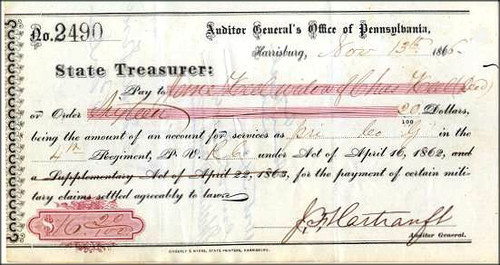 Civil War related Check signed by John Hartranft issued in November 1865. John Hartranft was the Auditor General of Pennsylvania when he signed the check. This historic document was printed by the Singerly and Meyers Company and is over 136 years old.

John Hartranft
Born in 1830 in Pennsylvania, John Hartranft attended school in Virginia and received his degree from Union College in New York. Before the war he was a trained civil engineer, a lawyer, and had held political office. The 90-day volunteer unit he belonged to turned its back and went home on the eve of First Manassas. Though their enlistment was up, Hartranft was humiliated by the decision and he stayed to fight with the army. This act earned him the Medal of Honor. He spent time in North Carolina, fought at Antietam, and served in the West, before gaining command of the 3rd Division of the IX Corps towards the end of the war. Hartranft is credited with the Union success at Fort Stedman and for this was made a brevet major general. At war's end he was appointed a special provost marshal during the trial of those accused in Lincoln's assassination. Afterwards he became a Auditor General, a two-term governor of Pennsylvania (Republican 1873-1879), the postmaster of Philadelphia, and collector of the city port. Hartranft was the second Major General of the Civil War to be elected Governor of Pennsylvania. The Constitution of 1873 was adopted during Hartranft's first year in office. Members of the Legislature had two-year terms instead of annual terms. Senators went from three years to four years. Most important in the Constitution of 1873 was the prohibiting of special and local legislation. The United States became one hundred years old in 1876 and Hartranft saw that Pennsylvania led the way in the Centennial Celebration that was centered in Philadelphia's Fairmont Park. Riots broke out across Pennsylvania caused by coal and railroad strikes. The riots prompted Hartranft to call out the militia. The situation worsened in Pittsburgh causing the Governor to call on the Regular Army to restore order. In Philadelphia, Reading, and Pittsburgh fires burned and eleven people died along the Schuylkill River before the United States troops had taken control. 1877 was one of the darkest years in Pennsylvania's history. There were widespread killings and all of Pennsylvania's miners went on strike causing the State Guard to be called out again. Because of his action, an historic precedent was set when the District Attorney of Allegheny County tried to force Hartranft to appear before a grand jury to tell why the militia was called out in Pittsburgh. The courts backed Hartranft when he refused to appear. It became known as the Hartranft Decision. Hartranft understood what was happening during these turbulent and changing times. Those with money and those who worked for them would have to come to arbitration to settle their differences for neither party could exist without the other. Hartranft was concerned with fixing limitations on State banks and trust companies. He also worked on expanding the public school system to educate the large masses of uneducated European labor that was being imported into Pennsylvania. The solution he saw was education. When his second term ended, Hartranft went to Philadelphia as Postmaster and Collector of the Port. He died in 1889 his tenth year as Commanding General of the Pennsylvania National Guard. He is the only Governor honored with a statue in front of the State Capitol where he forever sits on his great stallion.