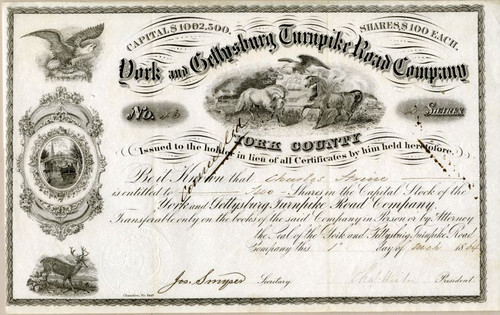 Beautiful stock certificate from the York and Gettysburg Turnpike Road Company issued in 1864. This historic document has an ornate border around it with a vignettes of the Pennsylvania state seal. This item has the signatures of the Company's President, Charles Weiser, and Treasurer, Jos. Smyser and is over 151 years old. 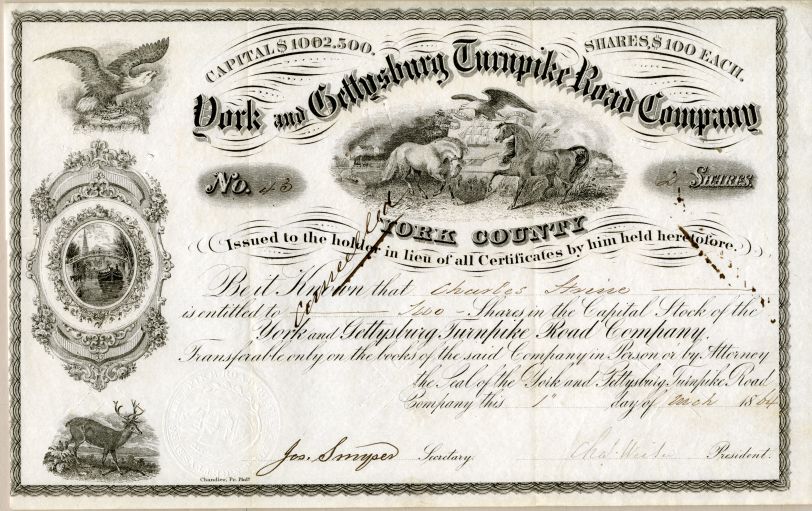 Certificate
History of York County, Pennsylvania, Volume 2 Charles Weiser, son of Samuel, Sr., and father of John A. and Charles S. Weiser, who are prominently identified with the business interests of York, was born in 1796, and was the junior member of the dry goods firm of J. & C. Weiser, commencing business in 1818, and continuing until 1846. In 1856 he founded the banking house in his own name. In January, 1860, his son, Charles S. Weiser, became a member of the firm. In January, 1867, was formed the firm of Weiser, Son & Carl, which has since merged into the York County National Bank. For a number of years Charles Weiser was a director in the York Bank, and president of the York & Gettysburg and York & Susquehanna Turnpike Companies. He was a member of Christ's Lutheran Church under Dr. Schmucker, and one of the founders of St. Paul's Lutheran Church. He died in 1867, aged seventy-one years. History from Wikipedia, Encyberpedia and OldCompany.com (old stock certificate research service)

Schools of Michigan - To Her 13,000 Fallen Braves during Civil War - Michigan