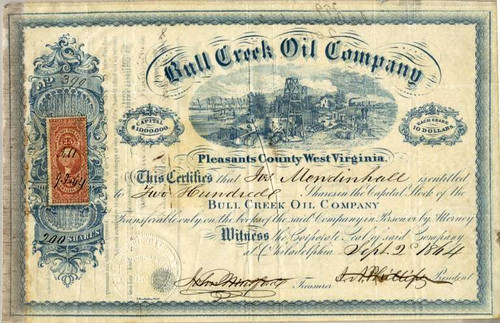 Beautiful historic stock certificate from the Bull Creek Oil Company issued in 1864 during Civil War. This historic document has an ornate border around it with a vignette of an early oil field and derrick, and has a Civil War era tax stamp affixed to its face. Light ledger residue on left margin. This item has the signatures of the Company's officers. Pen cancelled. This certificate was issued a year after West Virginia was admitted to the United States. In 1861, 50 northwestern counties of Virginia decided to break away from Virginia during the American Civil War to form West Virginia. 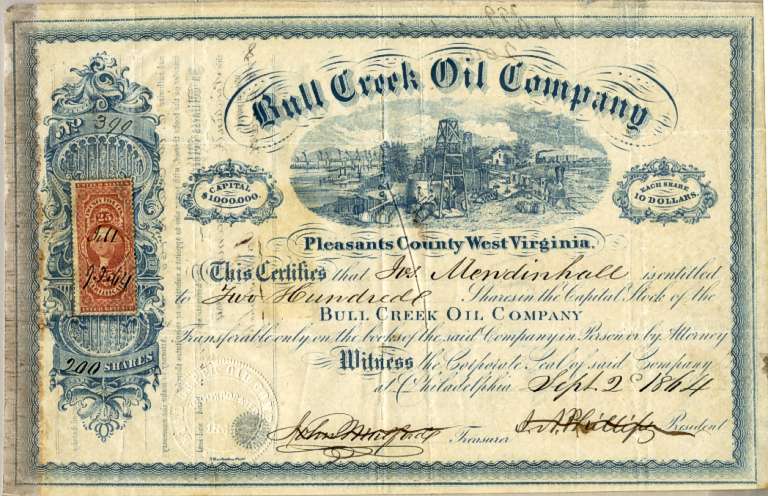 Certificate
The Bull Creek Oil Company had operations inWest Virginia , and their business office was located in Philadelphia, Pennsylvania. West Virginia became a state following the Wheeling Conventions of 1861, in which 50 northwestern counties of Virginia decided to break away from Virginia during the American Civil War. The new state was admitted to the Union on June 20, 1863, and was a key Civil War border state. West Virginia was the only state to form by seceding from a Confederate state and was one of two states formed during the American Civil War (the other being Nevada, which separated from Utah Territory). History from Encyberpedia and OldCompany.com (old stock certificate research service