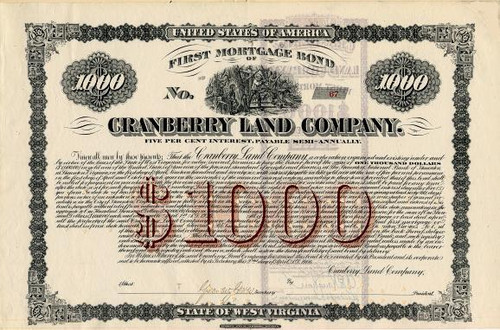 Beautiful partially issued certificate from the Cranberry Land Company dated in 1906. This historic document was printed by Caldwell Sites Company Stationers of Staunton, Virginia and has an ornate border around it with a vignette of lumberjacks. The company was incorporated in West Virginia. This item has the signatures of the Company's Secretary, George W. Jones and is over 100 years old. Punched cancelled. This bond was also signed by the Trustee's B. E. Vaughan and Rudolph Bumgardner on the back. 40 coupons attached on bottom with punched cancellations. 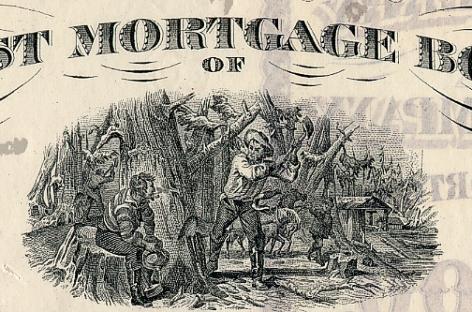 Certificate Vignette
For many decades, Cranberry's developement was slowed by the lack of a effective transportation link. By the late-1830's, the Giles, Fayette and Kanawha Turnpike was in place, linking Beckley with the courthouses in Fayetteville and Giles County, VA. In 1871, the Piney River Turnpike Company had been formed to construct a road from Beckley to the Chesapeake and Ohio Railroad, which was nearing completion of its rail line connecting the tidewater region of Virginia with the Ohio River at Huntington, WV. The West Virginia Legislature passed an act incorporating the town of Beckley, Raleigh County on Feb. 20, 1872. The original trustees resposible for government of the town were Alfred Beckley, Clarkson Prince, William Prince, John Bailey, and Richard McVey. By the late-1800's a narrow gauge railroad, the Glade Creek & Raleigh Railroad (GC&R), had linked Beckley via a connection near the C&O mainline, at Glade, WV, and in 1903 the Piney Creek Branch of the Chesapeake and Ohio Railway (C&O) was completed, linking Beckley to the C&O mainline at Prince, WV. The Piney River & Paint Creek Railroad completed its rail line through Beckley, connecting the C&O line at Beckley Junction with the New River Company's coal mines at Cranberry, West Virginia between 1904-1906. With the advent of vital rail links, the development of the coal fields in the vicinity of Beckley could began. In 1887, the Beaver Coal Company had purchased 47,000 acres of coal land in Raleigh County and by 1903, the company and it's mining operation, the Raleigh Coal and Coke Company, began marketing their coal via the trade name "Black Knight Coal." A rail line connecting with the C&O was achieved by the Virginian Railway by 1907 further facilitating the opening of additional mines in the New River Coal Field in the vicinity of Beckley. By 1925 another seventy-six coal mines were in operation in the newly opened Winding Gulf Coal Field and the town of Beckley was quickly becoming the center of a newly developed coal field, serving both as a shipping and distribution point as well as a center for coal offices and sales agencies.