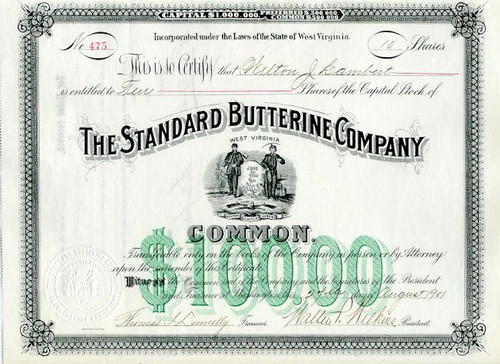 Beautifully engraved certificate from the Standard Butterine Company issued in 1901. This historic document has an ornate border around it with a vignette of a soldier and miner on the State Seal. This item is hand signed by the company's president and treasurer and is over 105 years old. Butterine was once also a name for Margarine. At the time, most Margarine was made from animal fat such as pork lard or beef tallow. When Hippolyte Mege-Mouriez took out his patent in England for Margarine in 1869, he did so calling it "butterine". In the late 1880s, it was used as the word for Margarine in the UK until the word "Margarine" won over. The use of the word "butterine" continued longer in America. Many Margarine companies called themselves "butterine" companies, such as the Standard Butterine Company of West Virginia, the Churngold Butterine Company of Ohio, and the "Baltimore Butterine Company" in Maryland, which was still in business in 1933. Butterine as now made a tentative reappearance, being used informally from time to time as a term to describe spreads that are a combination of Margarine and butter.