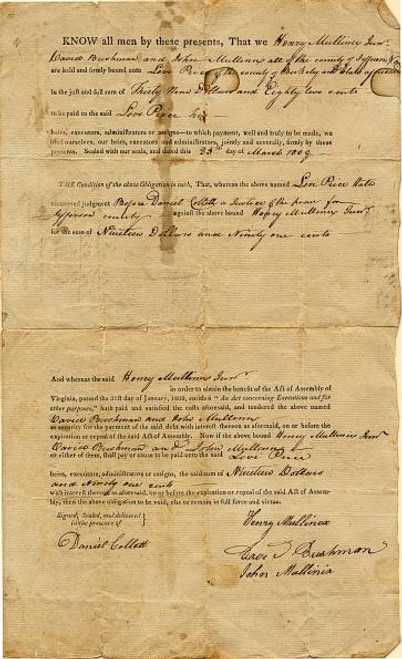 Document from Jefferson County Virginia dated in 1809 for a payment bond due to Levi Price. This item has the signatures of the Company's President and Secretary and is over 203 years old. 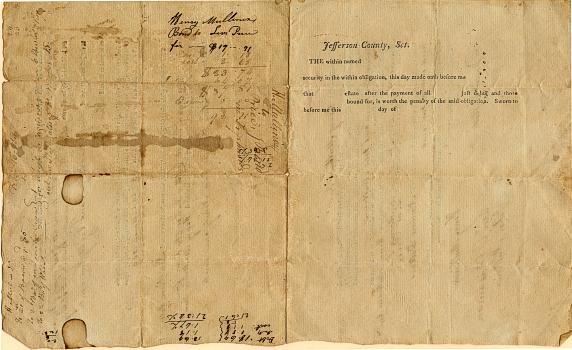 Back
Jefferson County was formed from Berkeley County in 1801 and named for Thomas Jefferson, author of the Declaration of Independence and third President of the United States. Virginia previously had a Jefferson County, which was lost to form the new state of Kentucky. Accordingly, in the State records of Virginia, there will be listings for Jefferson County from 1780-1792 and Jefferson County from 1801-1863. Neither is still located in Virginia and despite naming a county after him twice, Virginia no longer has a county named for its hero Thomas Jefferson. The county's courthouse was the site of the trial for the abolitionist John Brown after his October 1859 raid on the federal armory in Harpers Ferry. Some 90 U.S. Marines serving under then Army Colonel Robert E. Lee and Lieutenants J.E.B. Stuart and Israel Green put down the rebellion. Brown was sentenced to death for murder, treason against the Commonwealth of Virginia, and conspiring with slaves to rebel. On 2 December 1859 John Brown was taken from the Charles Town jail a short distance to an open field and hanged. Among those attending the Brown execution was a contingent of 1500 cadets from Virginia Military Institute sent by the Governor of Virginia Henry A. Wise under the supervision of Major William Gilham and Major Thomas J. Jackson. In the ranks of a Richmond militia company stood John Wilkes Booth. The county was a frequent site of conflict during the civil war, as Union and Confederate lines moved back and forth along the Shenandoah valley. Some towns in the county changed hands between the Union and Confederacy over a dozen times. Jefferson County is the only part of modern-day West Virginia not exempted from the effects of the Emancipation Proclamation (as Berkeley County and the 48 counties designated as West Virginia had been). Slaves in the county were legally free as of January 1, 1863. Both Berkeley and Jefferson counties had voted for secession in the vote taken on May 23, 1861. However, these counties lying on the Potomac River east of the mountains, with the consent of the Reorganized Government of Virginia supposedly voted in favor of annexation to West Virginia in 1863 in a dubious election supervised by the occupying Union Army. Virginia tried to nullify this after the American Civil War, but the counties remained part of West Virginia. The question of the constitutionality of the formation of the new state was brought before the Supreme Court of the United States in the following manner: Berkeley and Jefferson County, West Virginia, counties lying on the Potomac east of the mountains, in 1863, with the consent of the Reorganized Government of Virginia, had supposedly voted in favor of annexation to West Virginia. However, many voters were absent in the Confederate Army when the vote was taken and they refused to accept the transfer upon their return. The Virginia General Assembly repealed the Act of Secession and in 1866 brought suit against West Virginia, asking the Supreme Court to declare the counties still part of Virginia. Congress, on March 10, 1866, passed a joint resolution recognizing the transfer. In 1871, the U.S. Supreme Court decided Virginia v. West Virginia,upholding the succession of West Virginia, including Berkeley and Jefferson counties, from Virginia.