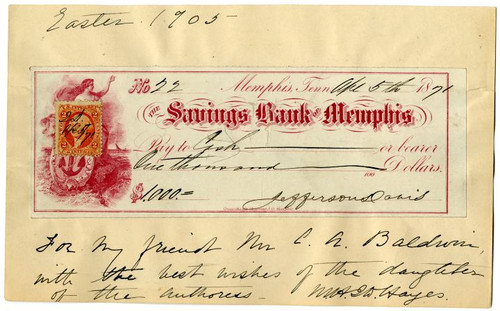 Check from the Savings Bank of Memphis issued for $1,000 Cash signed by Jefferson Davis issued in 1871. This historic document was mounted to a piece of paper and given to C. A. Baldwin in Easter in 1905 by Jefferson Davis' daughter Margaret Howell Davis Hayes. Below the check the following note is written: For my friend Mrs. C. A. Baldwin with the best wisghes of the daughter of the authoress - M.H.W.D. Hayes (signed) Thereis a Civil War era IRS stamp affixed to the face of the check. The check is over 141 years old. 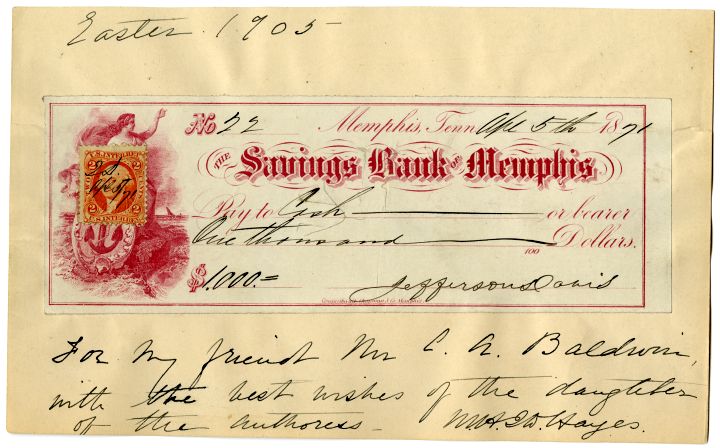 Jefferson Finis "Jeff" Davis (June 3, 1808 December 6, 1889) was an American statesman and leader of the Confederacy during the American Civil War, serving as President for its entire history. Davis was born in Kentucky to Samuel and Jane (Cook) Davis. After attending Transylvania University, Davis graduated from West Point and fought in the MexicanAmerican War as a colonel of a volunteer regiment. He served as the United States Secretary of War under Democratic President Franklin Pierce. Both before and after his time in the Pierce administration, he served as a Democratic U.S. Senator representing the State of Mississippi. As a senator, he argued against secession, but did agree that each state was sovereign and had an unquestionable right to secede from the Union. On February 9, 1861, after Davis resigned from the United States Senate, he was selected to be the provisional President of the Confederate States of America; he was elected without opposition to a six-year term that November. During his presidency, Davis took charge of the Confederate war plans but was unable to find a strategy to stop the larger, more powerful and better organized Union. His diplomatic efforts failed to gain recognition from any foreign country, and he paid little attention to the collapsing Confederate economy, printing more and more paper money to cover the war's expenses. Historians have criticized Davis for being a much less effective war leader than his Union counterpart Abraham Lincoln, which they attribute to Davis being overbearing, controlling, and overly meddlesome, as well as being out of touch with public opinion, and lacking support from a political party (since the Confederacy had no political parties). His preoccupation with detail, reluctance to delegate responsibility, lack of popular appeal, feuds with powerful state governors, inability to get along with people who disagreed with him, neglect of civil matters in favor of military ones--all these shortcomings worked against him. After Davis was captured on May 10, 1865, he was charged with treason. Although he was not tried, he was stripped of his eligibility to run for public office; Congress posthumously lifted this restriction in 1978. While not disgraced, he was displaced in Southern affection after the war by the leading Confederate general Robert E. Lee. However, many Southerners empathized with his defiance, refusal to accept defeat, and resistance to Reconstruction. Over time, admiration for his pride and ideals made him a Civil War hero to many Southerners, and his legacy became part of the foundation of the postwar New South. In spite of his former status as the president of the Confederacy, Davis began to encourage reconciliation by the late 1880s, telling Southerners to be loyal to the Union. Jefferson and Varina Howell Davis had six children; three died before reaching adulthood. Their first son, Samuel Emory, was born July 30, 1852, and was named after his grandfather; he died June 30, 1854, of an undiagnosed disease at less than two years old. Margaret Howell was born the following year on February 25, 1855. She married Joel Addison Hayes Junior (18481919) and moved to Colorado Springs. They had five children; Margaret was the only child of Jefferson and Varina to marry and raise a family. She died on July 18, 1909 at the age of 54. Born in Washington in 1855 Margaret was the eldest of the surviving children (Samuel, the firstborn, died in 1854). She was known as both Polly (or Pollie) and Maggie. She was a great favorite of her father's. Maggie began her studies with a tutor at the Second White House in Richmond, and was enrolled in schools in Montreal, London, Paris and Baltimore as the family moved about after the war. Like her parents, she was made of "sterner stuff". After she married J. Addison Hayes in Memphis in 1876, her brother Jeff Jr. came to live with them in 1878 when he contracted yellow fever. Margaret risked her own life to care for her dying brother. Four of the five Hayes children lived to adulthood. The family moved to Colorado Springs in 1885 and as her husband rose in city banking circles Margaret became involved with charitable causes and was a leading member of local society, according to Internet information from Rice University: The Maggie died in 1909 at the age of 54 and her ashes were taken by her husband and children to Richmond to be interred with the Davis family at Hollywood Cemetery. History from Wikipedia and OldCompany.com (old stock certificate research service)