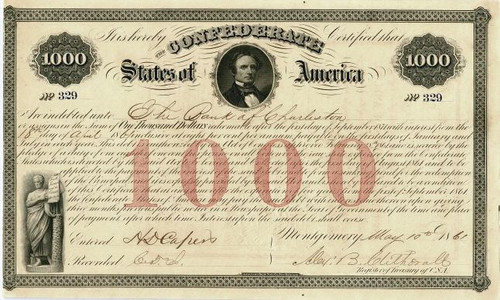 Beautifully engraved $1000 Bond certificate from the Confederate States of America dated March 10, 1861. This historic document was printed by the American Bank Note Company, New orleans and has an ornate border around it with a vignette of Jefferson Davis. This certificate has been hand signed by the Registry of the Treasury, Alex B. Clitherall in Montgomery, Alabama prior to the move to Richmond, Virginia. There were only 810 of these bonds issued but it is unknown how many survived over the years. Overall in Extra Fine Condition. The Bond was issued to The Bank of Charleston.

Certificate Vignette
Alex B. Clitherall was the first Registry of the Treasury for the Confederate States of America. Henry Dickson Capers was a reporter for a Charleston newspaper at Montgomery when C. G. Memminger hired him as his chief clerk. Capers held this job for the one year's duration of the Provisional Congress, before he left to join the artillery. History from Wikipedia and OldCompany.com (old stock certificate research service)