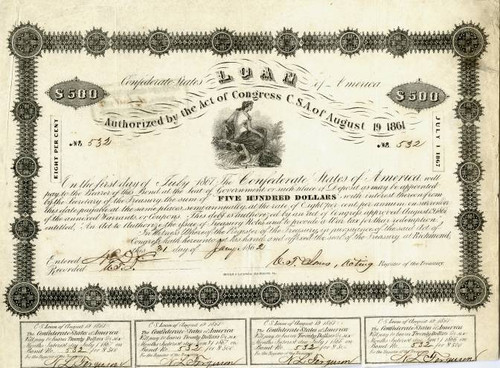 Beautifully printed $500 certificate from the Confederate States of America dated January 16, 1862. This historic document was printed by Hoyer & Ludwig, Richmond, Virginia and has an ornate border around it with a vignette of Ceres sitting in the center. It was issued under the Act of August 19, 1861. This certificate has been hand signed by Robert Tyler, Register of the Treasury or Acting Register of the Treasury, C.S. Jones. There were only 901 of these bonds issued but it is unknown how many survived over the years. Folded and minor foxing. Overall in Very Fine Condition. 5 coupons attached. 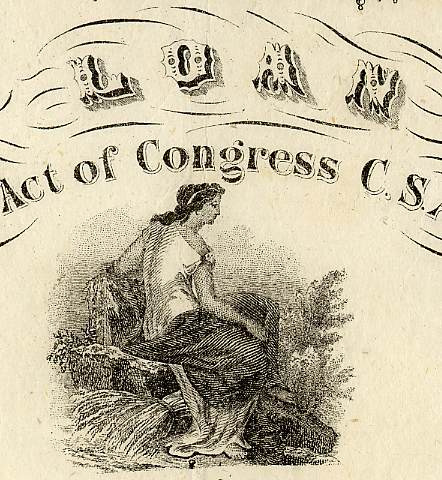 Certificate Vignette
Robert Tyler was born in New Kent county, Virginia, in 1818: died in Montgomery, Alabama, 3 December, 1877, was educated at William and Mary, and adopted the profession of law. He married Priscilla, a daughter of Thomas Apthorpe Cooper, the tragedian, in 1839, and when his father became president his wife assumed the duties of mistress of the White House till after Mrs. John Tyler's death, when they devolved upon her daughter, Mrs. Letitia Semple. Mr. Tyler removed to Philadelphia in 1843, practised law there, and held several civil offices. In 1844 he was elected president of the Irish repeal association. A little later he became prothonotary of the supreme court of Pennsylvania, and in 1858 he was chairman of the Democratic executive committee of the state. He moved to Richmond at the beginning of the civil war, and was appointed Register of the Treasury. After the war he edited the "Mail and Advertiser" in Montgomery, Alabama He published "Ahasuerus," a poem (New York, 1842) ; "Death, or Medora's Dream," a poem (1843) ; "Is Virginia a Repudiating State? and the States' Guarantee," two letters (Richmond, Virginia, 1858).