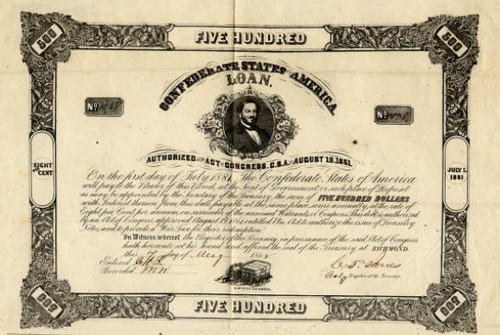 Beautifully printed certificate from the Confederate States of America dated 1862. This historic document was printed by B. Duncan, Richmond, Virginia and has an ornate border around it with a vignette of Judah P. Benjamin. This was issued under the Act of August 19, 1861. This certificate has been hand signed by the Register of the Treasury, Robert Tyler. 33 coupons attached. Only 2621 issued. 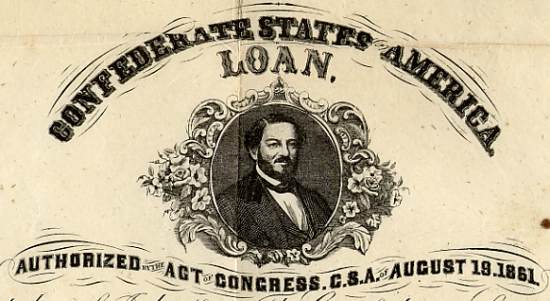 Certificate Vignette
Judah P. Benjamin (August 6, 1811 - May 5, 1884) Judah Philip Benjamin was born in the West Indies. His family moved to the Carolinas. He was a Yale educated lawyer. he was elected to the U.S. Senate (1852). He was appointed under the Confederacy. A rare Sephardic Jew in the Old South and a favorite of Jefferson Davis, Judah P. Benjamin has been described as "the brains of the Confederacy." He held was Davis's closest confidant in the government. In 1865, he moved to Great Britian and practiced law. Robert Tyler (1816-1877), the Registry of the Treasury, was a son of U.S. President John Tyler by his first wife. Tyler was head of the Democratic party in Pennsylvania and a personal friend of President James Buchanan before he had to flee to the Confederacy. Through his father's influence, he procured the post of Register of the Treasury, which he held from August 13, 1861 to the end of the war. After the war Tyler moved with his family to Alabama, where he became a newspaper editor. He also became the head of the Democratic Party in Alabama. History from OldCompany.com (old stock certificate research service)