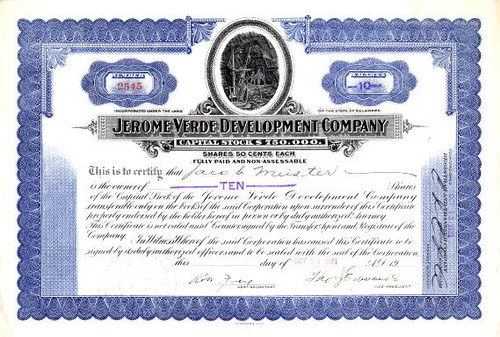 Beautifully engraved Certificate from the Jerome Verde Development Company issued in 1922 or earlier. This historic document was printed by the H. K. Brewer Company and has an ornate border around it with a vignette of men working inside of a mine. This item is hand signed by the company's officers and is over 83 years old. 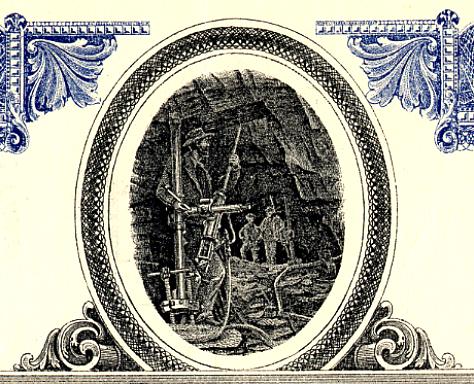 Certificate Vignette
Jerome was built on Cleopatra Hill above a vast deposit of copper. Prehistoric Native Americans were the first miners, seeking colored stones. The Spanish followed, seeking gold but finding copper. Anglos staked the first claims in the area in 1876, and United Verde mining operations, began in 1883, followed by the Little Daisy claim. Jerome grew rapidly from tent city to prosperous company town as it followed the swing of the mines' fortunes. The mines, the workers, and those who sought its wealth, formed Jerome's colorful history. Americans, Mexicans, Croatians, Irish, Spaniards, Italians and Chinese made the mining camp a cosmopolitan mix that added to its rich life and filled its streets with excitement. The Ghost City Jerome was the talk of the Territory... boom town of its time... darling of promoters and investors. The mines were nourished and exploited by financiers who brought billions of dollars of copper, gold and silver, from its depths. Changing times in the Territory saw pack burros, mule drawn freight wagons, and horses replaced by steam engines, autos and trucks. Fires ravaged the clapboard town again and again. Landslides ravaged whole sections of the town. Jerome was always rebuilt. Dependent on the ups and downs of copper prices, labor unrest, depressions and wars, Jerome's mines finally closed in 1953. Today's Jerome After the mines closed in 1953 and "King Copper" left town, the population went from a peak of 15,000 in the 20s to some 50 persons. A few hardy souls remained: The Jerome Historical Society guarded the buildings against vandalism and the elements, the Douglas Mansion was made a State Park in 1965 and Jerome became a National Historic Landmark in 1976. During the 60s and 70s, the time of the counter culture, Jerome offered a haven for artists. Soon newcomers and Jerome old timers were working together to bring Jerome back to life. Today, Jerome is very much alive with writers, artists, artisans, musicians, historians, and families. They form a peaceful, colorful, thriving community built on a rich foundation of history and lore.