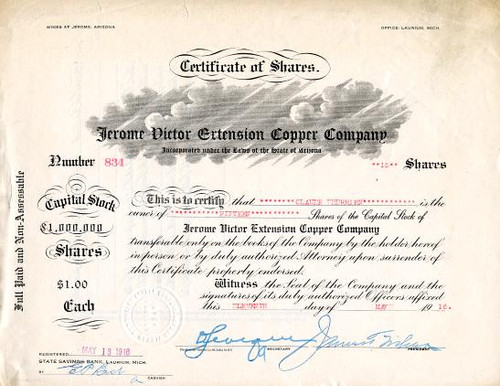 Beautifully engraved uncancelled certificate from Jerome Victor Extension Copper Company issued in 1916. This historic document was printed by the Broun Green Company and has the company's name on top center with clouds behind. This item has the signatures of the Company's President and Secretary and is over 89 years old. the company's mines were located in Jerome, Arizona and their business office was located in Laurium, Michigan. Jerome Victor Extension Copper Company A copper property on 8 claims that adjoin the United Verde Copper Co. property on the West. Owned by the Jerome-Victor Extension Copper Co.; and, the West United Verde Co.'s United Verde Extension Mining Co. Mineralization is lenticular orebodies in diorite schist reported to be 3 to 19 feet wide and traceable for 2,000 feet. Workings include the Haynes shaft at 1,200 feet deep with 2,000 feet of drifts on the 700 level and 800 feet on the 1200 level. The Jerome Victor Extension Copper Company was acquired by the United Verde Copper Company in 1917. Founded in 1876, Jerome was once the fourth largest city in the Arizona Territory. Jerome sits above what was the largest copper mine in Arizona and produced an astonishing 3 million pounds of copper per month. Men and women from all over the world made their way to Arizona to find work and maybe a new way of life. In the old days, Jerome was called the "Wickedest town in the West" due to the number of saloons and brothels. The town prospered until the mines and the mining economy began declining during the Great Depression with the last mine closing in 1953. In its 70-year active life, Jerome produced over a billion dollars worth of copper, gold, silver and zinc.