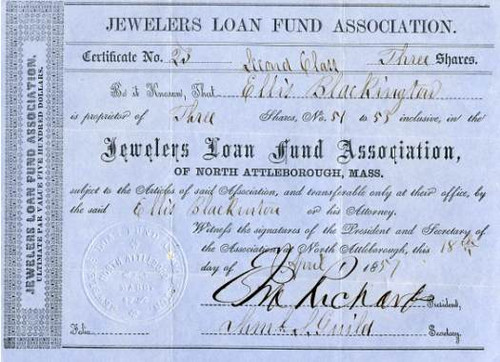 Beautifully printed certificate from the Jewelers Loan Fund Association issued in 1857. This item is hand signed by the Company's President and Secretary and is at least 147 years old. North Attleboro is an industrial town in Bristol County on the Rhode Island border. In-pre-Colonial times, it was the site of the Bay Path, a major Indian trail to Narragansett Bay. History dates back to the Civil War where growth was spurred with profitable orders for badges and medals for the U. S. Army. John Woocock and family established a small settlement in North Attleborough in 1669, which subsisted on agriculture, fishing and hunting but also clearly liked a little conviviality because by 1670, Woocock had received a license to open an ordinary, or tavern. The settlement was attacked during the King Philip war, with two killed and one home burned, but the garrison house which Woocock had built survived the attack. Recovery was swift after the war and the community grew very quickly; by 1776 there were 2200 people living there. In about 1780 a French settler set up a forge for working brass and the industrial era arrived in North Attleborough. Englishmen brought with them British machinery from Birmingham in 1794 and designed American improvements in button making which they patented. During the 18th and early 19th centuries, small grist and sawmills were built along the Ten mile River, and subsequently established nail factories were eventually eclipsed by cotton spinning mills. The development of cotton spinning was spurred by the embargo on imports resulting from the War of 1812. Textiles and jewelry manufacturing were the staple industries of the town by 1832 but buttons were king. By 1834 it was said that North Attleborough produced more buttons than anywhere in the United States. Through the 19th century there was tremendous growth and innovation in the jewelry industry and the number of firms in the town increased sharply. By 1855 there were 24 shops making almost $1 million in jewelry in both Attleboroughs. North Attleboro is 32 miles southwest of Boston and 12 miles north of Providence, Rhode Island. North Attleborough retains an outstanding collection of mid- to late- 19th century houses including several Italianate villas. New construction is growing by popular demand.