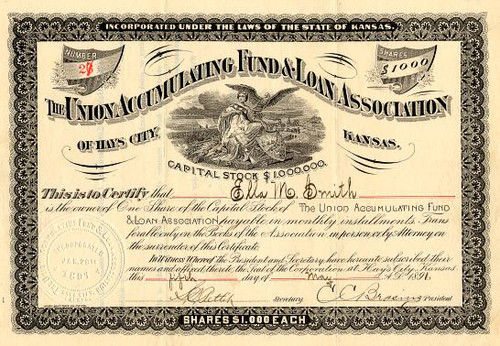 Beautiful certificate from the Union Accumulating Fund & Loan Association issued in 1891. This historic document was printed by Union Bank Note Company and has an ornate border around it with a vignette of Lady Liberty and an eagle. This item has the signatures of the Company's President and Secretary and is over 115 years old. 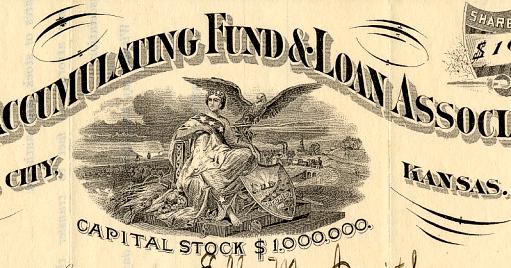 Certificate Vignette
The city of Hays was founded in 1867 as the southern branch of the Union Pacific Railroad worked its way west. Hays City was named after Fort Hays (founded in 1865 as Ft. Fletcher, renamed in 1866), which was in turn named for Alexander Hays, a Union General killed during the Civil War. Hays was a rough and tough town in its early years, at one time sporting 37 liquor establishments. Many notable people lived here, including the Custers and the 7th Cavalry, Will Bill Hickok, and William F. Cody, who acquired his nickname of Buffalo Bill by furnishing buffalo to feed the railroad workers in Hays. In "Following the Guidon", Elizabeth Custer described Hays City in 1869 as " a typical Western Place. The railroad but just reached here, the 'roughs' who fly before civilization, had not yet taken their departure." By the mid 1870's Hays began to become more "civilized". The 'roughs' had left and the farmers were arriving. In 1876 a group of Germans from the Volga region of Russia immigrated to this area. The Volga Germans brought Turkey Red Wheat with them and Hays was set to become an agricultural area. The Volga-Germans have had an enormous cultural impact on the area with their traditions still in evidence. Fort Hays closed in 1889 and work began to acquire part of the military reservation for a state school. In 1901 the legislature passed legislation establishing the Fort Hays Experiment Station (part of Kansas State University) and the Western Branch State Normal School from this land. The Normal School would grow into what is now Fort Hays State University. Hays City became the county seat of Ellis County in 1870 and was incorporated in 1885. Hays had a unique group serving as its City Council in 1900. The six were known as the "Boys Council" and were the youngest council in the United States to be governing a city the size of Hays. The youngest was 22 years old and the oldest was 30. This group was responsible for reducing the city debt, lowering the tax levy, building and equipping the first engine house and council room and building a water tank in the event of fire. Some of these improvements were due to a disastrous fire in 1895 which destroyed 60 businesses downtown. Other natural disasters also struck Hays-floods in 1907 and 1951, 3 gasoline tanks exploded in 1919 killing 8 and injuring 150, and 1935 saw dust storms across the area. But Hays has always bounced back and recovered from hardship. Hays is a steadily growing community, going from a population of 1,291 in 1900 to one of 17,767 in 1990. It is a center for education, business and culture for Western Kansas.