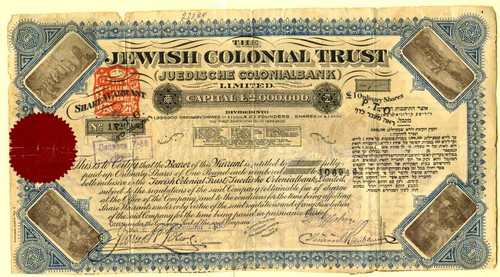 Beautifully engraved Share Warant for Ordinary shares in the Jewish Colonial Trust issued in 1900. This historic document has an ornate border around it with four vignettes including one of the Western Wall. This item is over 122 years old. This historic certificate is in worn condition and were folded and carried in the pockets if the owner.

Theodor Herzl had originally hoped to gain financial support for his plan of a Jewish state from amongst Jewish millionaires but with the failure of this approach he turned to the Jewish masses an offered them shares in a trust fund known as the Jewish Colonial Trust. Its operation began in 1902 with authorized capital of 2 million pounds sterling. 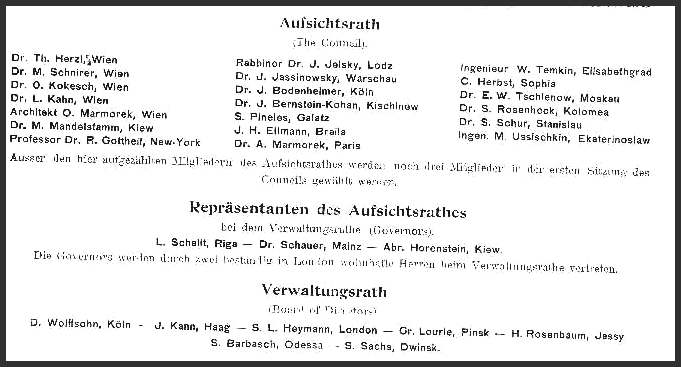 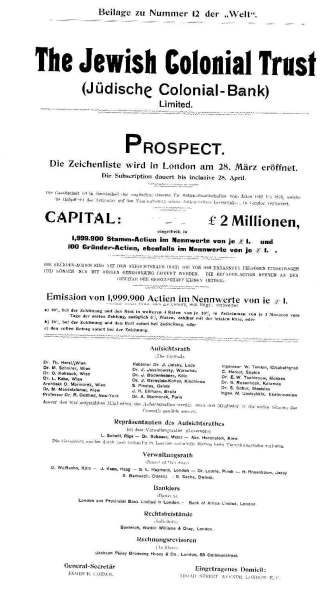 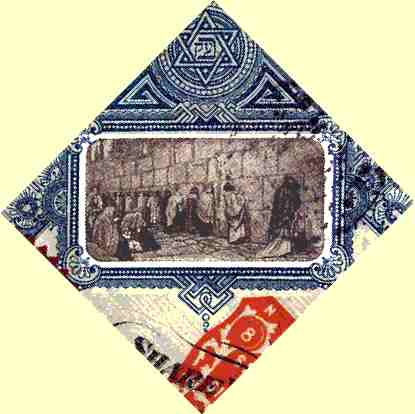 Herzl, Benjamin Zev (Theodor), 1860 - 1904 Writer and statesman. Founder of national Zionism and the World Zionist Organization, which elevated the Jewish problem to an international political subject of primary importance. His name and lifework, the political resurrection of the Jewish people, are engraved in the national consciousness and clothed in grandeur and legend. Theodor Herzl was born in Budapest in 1860. From an early age he was aware of the Jewish problem, antisemitism and the persecution of Jews, but it was the Dreyfus case that awakened in him national Jewish feeling and brought him to the conclusion that the Jewish problem could only be solved by political means. The concept of emergence from the diaspora and return to Zion found expression in his book "The Jewish State", which was written in 1896. Herzl appealed to wealthy Jews such as Baron Hirsch and Baron Rothschild, to join the national Zionist movement, but in vain. He then appealed to the people, and the result was the convening of the First Zionist Congress in Basel where the World Zionist Organization was established and the Basel Plan was formulated. Herzl convened six Zionist Congresses between 1897 and 1902. It was here that the tools for Zionist activism were forged: Otzar Hityashvut Hayehudim; the Jewish National Fund; the movement's newspaper Die Weldtand more.

Herzl's political activity covered two periods: 1. The orientation of the Germans and Turks from 1896-1901. During this time he attempted to gain a Charter from the Sultan of Turkey for the establishment of a Jewish state in Erez Israel. To this end he met in 1898 with the German Kaiser, Wilhelm II, in Istanbul and Erez Israel, as well as the Sultan. 2. The orientation of the British from 1902-1904. To this end he negotiated with the British on the possibility of settling the Jews on the island of Cyprus, the Sinai Peninsula or the El Arish region.

After the Kishinev pogroms Herzl visited Russia (July 1903) and requested that the Russian government assist the Zionist Movement to transfer Jews from Russia to Erez Yisrael. At the Sixth Congress Herzl broached the Uganda Plan which met with sharp opposition. Herzl met with the king of Italy, whose attitude was encouraging, and with the Pope, whose response to Zionism was negative.

Herzl died in 1904 and was buried in Vienna. After the establishment of the State of Israel his remains were reburied on Mt. Herzl, Jerusalem in the summer of 1949.

Herzl's books Der Judenstaat ("The Jewish State") and Altneuland ("Old New Land"), his plays and articles have been published frequently and translated into many languages. His name has been commemorated in the Herzl Forests at Ben Shemen and Hulda; the world's first Hebrew gymnasium "Herzlia" which was established in Tel Aviv; the town of Herzliyya in the Sharon; and neighborhoods and streets in many Israeli towns and cities.

To mark his visit to Erez Israel in 1898 Herzl planted a cypress tree on the land of Shmuel Broza, a settler in Motza near Jerusalem. By mistake it was assumed that the tree was a cedar, which became known as "Herzl's Cedar". During the riots of May 1921, the cypress was hacked down by Arabs from a village near Motza.

The first President of the Jewish Colonial Trust was David Wolffsohn, who upon the death of Herzl, assumed the Presidency of the World Zionist Organization. In 1902 the Trust established a subsidiary, the Anglo-Eretz-Israel Company Limited which later became the Anglo-Eretz-Israel Bank Ltd. and thereafter Bank Leumi Le-Israel. The Trust invested its funds in a variety of industrial and financial ventures both in and outside Eretz-Israel.