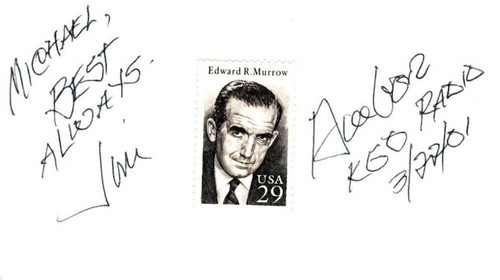 Jim Dungbar's autograph on a 3" x 5" card on a Edward R. Marrow 4 Cent U.S. Postage Stamp. Jim Dunbar (born 1929 in Dearborn, Michigan) is an American radio program director, talk show host and news anchor who helped boost the ratings of KGO (AM) into to the top five with its unique news/talk format. KGO consistently scored in the top five after 1963 and was #1 for a period of time after 1978, extending to about 2009. In addition to his radio work, he also hosted the popular A.M. San Francisco program on KGO-TV (Channel 7) for many years beginning in 1965. Dunbar is portrayed in the 2007 film Zodiac in a scene where the Zodiac killer calls in to Dunbar's broadcast (with Dunbar hosting guest Melvin Belli) in 1969. Dunbar was a graduate of the Fordson High School class of 1947 in Dearborn, Michigan, and later worked as a rock DJ at WXYZ Detroit, Michigan, WDSU New Orleans, Louisiana, and WLS (AM) Chicago before coming west to KGO in 1963. Dunbar worked at KGO for the next 37 years, retiring in 2000. He was elected to the National Radio Hall of Fame in 1999, and to the Bay Area Radio Hall of Fame (Class 2006) in 2006 as a member of the first class to be inducted. History from Wikipedia and OldCompany.com (old stock certificate research service)