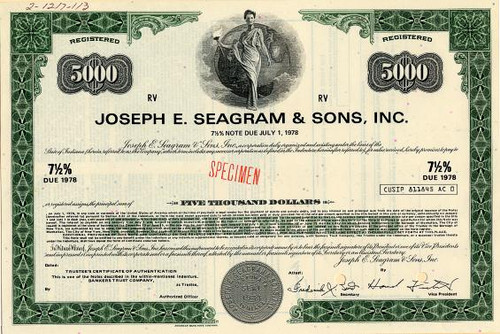 Beautiful engraved RARE specimen certificate from the Joseph E. Seagram & Sons printed in 1971 . This historic document was printed by American Bank Note Company and has an ornate border around it with a vignette of an allegorical woman. This item has the printed signatures of the Company's officers and is over 37 years old. 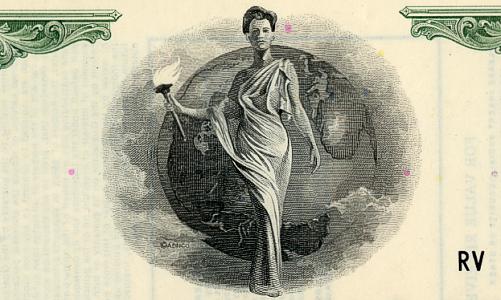 Certificate Vignette
The Seagram Company Ltd. was a large corporation headquartered in Montreal, Quebec, Canada that was the largest distiller of alcoholic beverages in the world. Toward the end of its independent existence it also controlled various entertainment and other business ventures. The Seagram assets have since been acquired by other companies, notably PepsiCo, Diageo, and Pernod Ricard. The famous Seagram Building, the company's American headquarters office tower at 375 Park Avenue in New York City, was designed by architects Ludwig Mies van der Rohe with Philip Johnson. The former Seagram headquarters in Montreal now belongs to McGill University, under the name "Martlet House". Original Seagram Distillery buildings in Waterloo, now converted to residential condominiumsIn 1857, a distillery was founded in Waterloo, Ontario. Joseph E. Seagram became a partner in 1869 and sole owner in 1883, and the company became known as Joseph E. Seagram & Sons. Many decades later, Samuel Bronfman founded Distillers Corporation Limited, in Montreal, which enjoyed substantial growth in the 1920s, in part due to Prohibition in the United States. A few years after the death of Joseph E. Seagram 1928 the Distillers Corporation acquired Joseph E. Seagram & Sons, and took over the Seagram name. The company was well prepared for the end of Prohibition in 1933 with an ample stock of aged whiskeys ready to sell to the newly opened American market, and it prospered accordingly. Thus despite its earlier Waterloo history, the Seagram name is most closely associated with the Bronfman family. However, it is not correct to say, as is often done, that Samuel Bronfman founded Seagram, since the Seagram name itself pre-dated the company he founded. After the death of Samuel Bronfman in 1971, Edgar M. Bronfman was Chairman and Chief Executive Officer (CEO) until June of 1994 when his son, Edgar Bronfman, Jr., was appointed CEO. In 1981, cash rich and wanting to diversify, Seagram Company Ltd. engineered a takeover of Conoco Inc., a major American oil and gas producing company. Although Seagram acquired a 32.2% stake in Conoco, DuPont was brought in as a white knight by the oil company and entered the bidding war. In the end, Seagram lost out in the Conoco bidding war. But in exchange for its stake in Conoco Inc, it became a 24.3% owner of DuPont. By 1995 Seagram was DuPont's largest single shareholder with four seats on the board of directors. In 1987, Seagrams engineered a $1.2 billion takeover of important French cognac maker Martell & Cie. On April 6, 1995, after being approached by Edgar Bronfman, Jr., DuPont announced a deal whereby the company would buy back its shares from the Seagram company for the amount of $9 billion. Seagram's was heavily criticized by the investment community--the 24.3% stake in DuPont accounted for 70% of Seagram's earnings. Standard & Poor took the unusual step of stating that the sale of the DuPont interest could result in a downgrade of Seagram's more than $4.2 billion of long-term debt. The rationale for this divestiture was that Edgar Bronfman, Jr., grandson of Samuel Bronfman, wanted Seagram to branch out into the entertainment business. Bronfman, Jr., used the proceeds of the sale to help acquire Universal Studios, MCA, PolyGram, and Deutsche Grammophon. Seagram also gained control of a number of Universal theme parks. In 1997, the Seagram Museum, formerly the original Seagram distillery in Waterloo, was forced to close due to lack of funds. The building is now the home of the Centre for International Governance Innovation. The two original barrel houses are now the Seagrams Lofts condominiums. There are also almost five acres of land for future development. In 2000, controlling interest in Seagram's entertainment division was acquired by the Vivendi Group, and the beverage division by Pernod Ricard. By the time Vivendi auctioned off Seagram's drink business, beyond its original high-profle brand names the once renowned operation consisted of around two hundred and fifty drinks brands and brand extensions. In 2001, The Coca-Cola Company acquired the line of Seagram's mixers (ginger ale, tonic water, club soda and seltzer water) from Pernod Ricard and Diageo, as well as signing a long term agreement to use the Seagram's name from Pernod Ricard. On April 19, 2006, Pernod Ricard announced that they would be closing the Seagram Lawrenceburg Distillery located in Lawrenceburg, Indiana. History from Wikipedia and OldCompanyResearch.com. About Specimens Specimen Certificates are actual certificates that have never been issued. They were usually kept by the printers in their permanent archives as their only example of a particular certificate. Sometimes you will see a hand stamp on the certificate that says "Do not remove from file". Specimens were also used to show prospective clients different types of certificate designs that were available. Specimen certificates are usually much scarcer than issued certificates. In fact, many times they are the only way to get a certificate for a particular company because the issued certificates were redeemed and destroyed. In a few instances, Specimen certificates we made for a company but were never used because a different design was chosen by the company. These certificates are normally stamped "Specimen" or they have small holes spelling the word specimen. Most of the time they don't have a serial number, or they have a serial number of 00000. This is an exciting sector of the hobby that grown in popularity over the past several years.