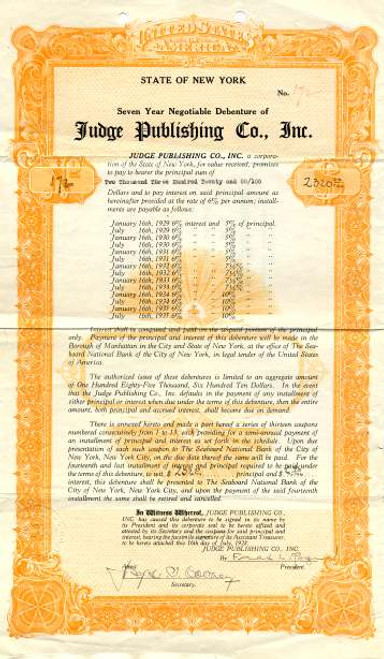 Beautifully engraved certificate from the Judge Publisihing Company, Inc. issued in 1928. This historic document has an ornate border around it. This item is hand signed by the Company's President and Secretary and is over 76 years old. This publishing house was an outgrowth of "Judge" humor magazine. The magazine was founded in 1881 by Frank Tousey, pulbisher of dime novels, James Albert Wales, a cartoonist, and George H. Jessop, an author. Purchased 1887 by WIllima J. Arkell, who built it into a major publication rivaling "Puck". He issued a series of paperback books, mostly as advertising suppliements for his numerous magazines, including "Leslie's Weekly". First book: Napolean Smith, by anonymous. Arkell advertized a reward of $250 to the first reader who could identify the author. Sold over 200,000 copies. Second book: Star-Crossed, autobiography of a famous actress. Again, the reader was offered a reward to guess the actress' name, but no one did. Third book: "Judge's Library", a series of books of compilations from "Judge" magazine.