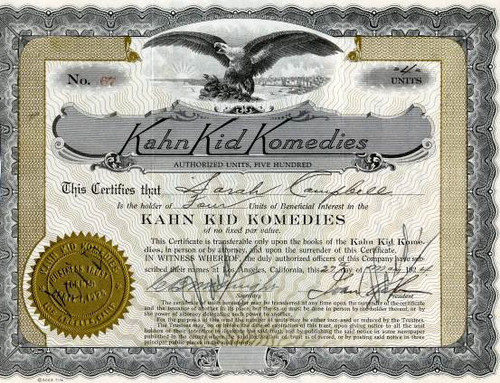 Beautifully engraved certificate from Kahn Kid Komedies issued in 1924. This historic document was printed by the Goes Lithograph Company and has an ornate border around it with a vignette of an eagle perched upon a rock overlooking a city by the sea. This item is hand signed by the Company's President ( Ivan Kahn ) and Secretary and is over 84 years old. The left side of the certificate border has been trimmed.

Certificate Vignette
The Kahn Kid Komedies was a series featuring a group of children Ivan Kahn (1890-1951) was born in Los Angeles, California and became an amateur boxer. He was exposed to film industry through his father's candy and cracker manufacturing company, Kahn-Beck, which sold candy endorsed by film personalities. Kahn eventually started his own company, Ivan B. Kahn Specialties, to exploit similar products. He joined the volunteer army in World War I and was stationed with the California Coast Artillery in San Diego. In the early 1920s Kahn worked as a reader in the PathÃ© scenario department and at an extras booking agency. He went freelance around 1924 and founded the Ivan Kahn Agency as early as 1929. His 1930 client roster included Gilbert Roland, Joe E. Brown, and Lew Ayres. Darryl F. Zanuck signed Kahn as a talent scout for 20th Century-Fox in 1937, a post Kahn held until his death. The Ivan Kahn Collection was donated to the Academy of Motion Picture Arts and Sciences as described below: The Ivan Kahn Collection spans the years 1907-1951 (bulk 1930s-1940s) and encompasses 0.6 linear foot. The collection contains correspondence and clippings related to Kahn and talent agents. There are copies of talent scout reports for more than fifty individuals, among them Dana Andrews, Joe E. Brown, Linda Darnell, Olivia de Havilland, Jennifer Jones, DeForest Kelley, Alan Ladd, Veronica Lake, Angela Lansbury, Cornel Wilde, and Darryl F. Zanuck. Documentation of the Ivan Kahn Agency in the 1930s includes several contracts with clients such as Lew Ayres, Olivia de Havilland, and Gilbert Roland, a list of client commissions, a journal listing professional service fees, and a payment ledger. Of interest is a 1942 logbook Kahn kept detailing a record of theaters, plays, and performers seen, with comments on performers as to their screen potential. Kahn nurtured many careers, including that of Monetta Darnell, better known as Linda Darnell. His "discovery" of Darnell, whom Kahn brought from Dallas to Hollywood in 1938, is documented by clippings and correspondence. Kahn's involvement with novelty items--such as candy boxes featuring likenesses of film personalities--is documented in correspondence from 1915 to 1919 regarding Reel Chocolates, Charlie Chaplin moulds for Penny Marshmallows, and others. Nearly a dozen photographs are taken from the "Kahn Kid Komedies," a series featuring a group of children formed by Kahn in 1924. Gift of Mrs. Jessie Kulberg and John Kahn, October 21, 1976; July 19, 1977; October 18, 1977; November 23, 1977.