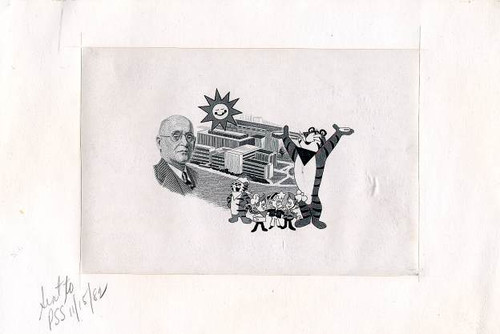 Historic Printer's Proof Vignette from the Kellogg's Company. This historic document came from the archives of the American Banknote Company and shows a vignette for their stock certificate showing John Harvey Kellogg, Tony the Tiger and Snap, Crackle and Pop in fron of their Battle Creek facilities. This item is Unique and RARE. Kellogg's was founded as the Battle Creek Toasted Corn Flake Company on February 19, 1906, by Will Keith Kellogg as an outgrowth of his work with his brother John Harvey Kellogg at the Battle Creek Sanitarium following practices based on the Seventh-day Adventist Christian denomination. The company produced and marketed the hugely successful Kellogg's Toasted Corn Flakes and was renamed the Kellogg Company in 1922. In 1930, the Kellogg Company announced that most of its factories would shift towards 30 hour work weeks, from the usual 40. This practice remained until World War II, and continued briefly after the war, although some departments and factories remained locked into 30 hour work weeks until 1980. From 1969 to 1977, Kellogg's acquired various small businesses including Salad Foods, Fearn International, Mrs. Smith's Pies, Eggo, and Pure Packed Foods; however, it was later criticized for not diversifying further like General Mills and Quaker Oats were. Kellogg Company headquartersAfter underspending its competition in marketing and product development, Kellogg's U.S. market share hit a low 36.7% in 1983. A prominent Wall Street analyst called it "a fine company that's past its prime" and the cereal market was being regarded as "mature." Such comments invigorated Kellogg chairman William E. LaMothe to improve, which primarily involved approaching the demographic of 80 million baby boomers rather than marketing children-oriented cereals. In emphasizing cereal's convenience and nutritional value, Kellogg helped persuade U.S. consumers age 25 to 49 to eat, 26% more cereal than people that age ate five years prior. The U.S. ready-to-eat cereal market, worth $3.7 billion at retail in 1983, totaled $5.4 billion by 1988, and had expanded three times as fast as the average grocery category. Kellogg's also introduced new products including Crispix, Raisin Squares, and Nutri-Grain Biscuits and reached out internationally with Just Right aimed at Australians and Genmai Flakes for Japan. During this time, the company maintained success over its top competitors: General Mills, who largely marketed children's cereals, and Post, who had difficulty in the adult cereal market. In March 2001, Kellogg made its largest acquisition, the Keebler Company. Over the years it has also gone on to acquire Morningstar Farms and Kashi divisions or subsidiaries. Kellogg also owns the Bear Naked, Natural Touch, Cheez-It, Murray, Austin, Famous Amos, Gardenburger (acquired 2007) and Plantation brands. History from Wikipedia and OldCompany.com (old stock certificate research service).