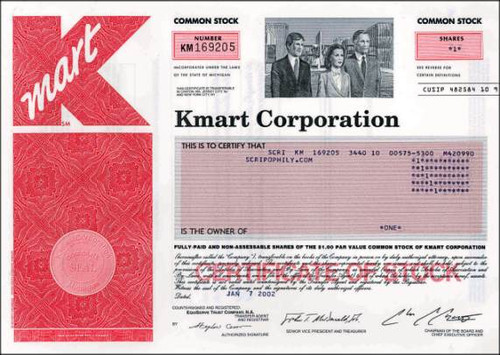 Beautifully engraved Certificate from the Kmart Corporation . This historic document was printed by the American Banknote Company and has an ornate border around it with a vignette of a woman and two men in front of office buildings. This item has the printed signatures of the company's officers including Charles C. Conaway as Chairman of the Board and CEO. 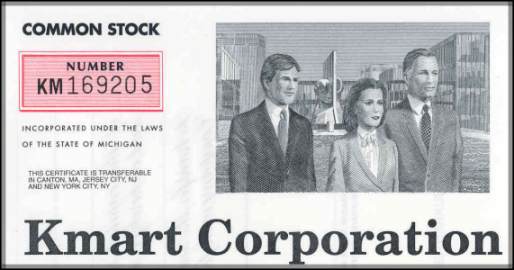 Certificate Vignette
Kmart Corporation is a discount retailer operating through 1,511 Kmart discount stores and Supercenters with locations in 49 states, Puerto Rico, the United States Virgin Islands and Guam, as of January 28, 2004, and through an e-commerce shopping site, www.kmart.com. The Company has one operating segment that consists of its retail business. Its general merchandise retail operations are located in 286 of the 331 metropolitan statistical areas in the United States. Its 60 Kmart Supercenters combine a full grocery, deli and bakery, along with the general merchandise selection of a Kmart discount store. The brands that the Company markets include Martha Stewart Everyday, JOE BOXER, Jaclyn Smith, Sesame Street and Thalia Sodi, among others. . Kmart bought Sears, Roebuck and Co. for $12.3 billion on March 25, 2005, combining two faded retail icons whose sales have been declining for years into the nation's third biggest retailer with $55 billion in annual sales. The new company name is Sears Holdings Corporation.