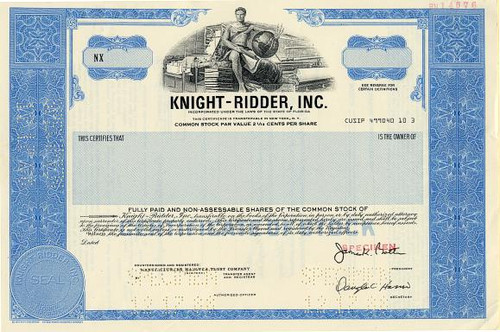 Beautiful certificate from the Knight - Ridder printed in 1988. This historic document was printed by United States Bank Note Company and has an ornate border around it with a vignette of an allegorical man holding a globe. This item has the printed signatures of the Company's President and Secretary. 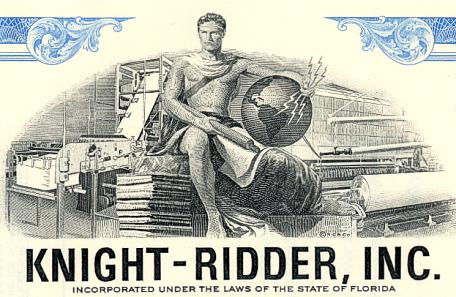 Certificate Vignette
Knight Ridder is the nation's second-largest newspaper publisher, with products in print and online. The company publishes 32 daily newspapers in 28 U.S. markets, with a readership of 8.5 million daily and 12.1 million Sunday. Knight Ridder also has investments in a variety of Internet and technology companies and two newsprint companies. The company's Internet operation, Knight Ridder Digital, creates and maintains a variety of online services, including Real Cities (www.RealCities.com), a national network of city and regional destination sites in 56 U.S. markets. Knight Ridder and Knight Ridder Digital are located in San Jose, Calif.