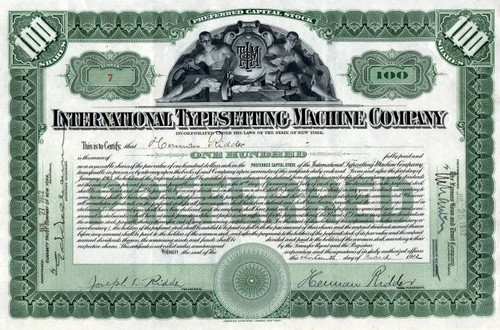 Beautifully engraved uncancelled stock certificate from the International Typesetting Machine Company issued in 1912. This historic document was printed by the American Bank Note Company and has an ornate border around it with a vignette of the company logo flanked by two male allegorical figures. This item has the original signatures of the Company's President, Herman Ridder and Treasurer, Joseph E. Ridder and is over 105 years old. The certificate was issued to Herman Ridder and endorsed by him on the verso.

Certificate Vignette
The corporate ancestors of Knight Ridder were Knight Newspapers, Inc. and Ridder Publications, Inc. The first company was founded by John S. Knight upon inheriting control of The Akron Beacon Journal from his father, Charles Landon Knight, in 1933; the second company was founded by Herman Ridder when he acquired the German language Staats-Zeitung newspaper in 1892. As anti-German sentiment increased between the two world wars, Ridder successfully transitioned into English language publishing by acquiring the Journal of Commerce in 1926. Joseph E. Ridder was Chairman of Ridder Publications, Inc. Both companies went public in 1969 and merged in 1974. For a brief time, the combined company was the largest newspaper publisher in the United States Herman Ridder (1851 November 1, 1915) was an American newspaper publisher and editor. Ridder was born in New York City, of German parents. His boyhood was spent in various lines of industry, including life insurance. In 1878 he established the Katholisches Volksblatt, and married Mary C. Amend in 1880. He founded the Catholic News in 1886, later continued by his brother Henry Ridder. In 1890 he became trustee and manager, and in 1907 president of the New Yorker Staats-Zeitung, then the largest and most influential daily paper printed in the German language in the United States. During the visit of Prince Henry of Prussia in February 1903, Ridder arranged a dinner in Henry's honor. In 1908 he was treasurer of the Democratic National Committee. He was an official of several important financial institutions. Ridder came into conflict with the Federal authorities following the outbreak of World War I for an alleged pro-German campaign that he was charged with having carried on in his newspapers. He died insolvent, having lost his means with the failure of the International Typesetting Machine Company at the start of World War I. Friends and supporters of Ridder assumed the debts of his publishing enterprise, and the Staats-Zeitung continued under the joint management of his sons, Bernard H. Ridder and Victor F. Ridder. The Intertype Corporation produced the Intertype, a typecasting machine closely resembling the Linotype, and using the same matrices as the Linotype. Founded in 1911 by Hermann Ridder, of Ridder Publications, as the International Typesetting Machine Company, but purchased by a syndicate for $1,650,000- in 1916 and reorganized as the Intertype Corporation. Originally, most of their machines were rebuilt Linotypes. By 1917, however, Intertype was producing three models of its own machine. Most of the original patents for the Linotype had expired and so the basic works of the Intertype were essentially the same, though incorporating at least 51 improvement patents. The standard Intertype could cast faces up to thirty point and they also offered a "Composing Stick Attachment" that allowed their caster to be used to cast headlines up to 60 points. Despite initial liquidity problems, Intertype was quite successful in later years, producing mixer machines, high speed machines, and the first photo-type compositor. In 1957, Intertype merged with Harris-Seybold, a manufacturer of presses and paper cutters, to become Harris-Intertype Corporation. After the merger, the Harris-Intertype Fotosetter was introduced. It was the first photo typesetting machine and was based upon the standard Intertype machne, replacing the brass type matrices with small film negatives and instead of casting, used these to expose photographic paper. Throughout its history, Intertype machines were typically better built and engineered than Mergenthaler's, with simpler, more effective mechanisms. However, while both Mergenthaler and Lanston Monotype were known for producing new and innovative type designs, virtually all of Intertype's faces were derivative or supplied to them by the Bauer Type Foundry. The only type designer of note associated with Intertype was Edwin W. Sharr, who pioneered in adapting script faces for machine composition. History from Wikipedia and OldCompany.com (old stock certificate research service)