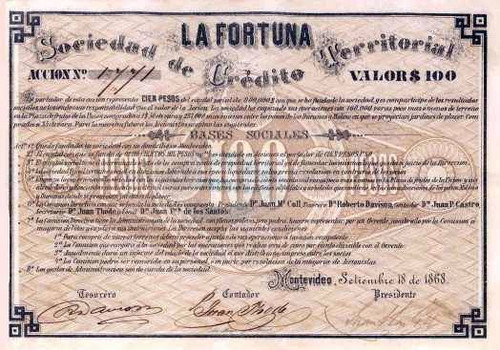 Beautifully engraved certificate from the La Fortuna Sociedad de Credito Territorial issued in 1868. This historic document has an ornate border around it. This item is hand signed by the Company's Presidente, Tesorero and Contador and is over 142 years old. Montevideo (pronunciation: [monte vi deo]) is the largest city, the capital, and the chief port of Uruguay. Established in 1726 as a strategic move amidst a Spanish-Portuguese dispute over the Viceroyalty of the RÃ­o de la Plata, Montevideo has a population of 1,338,408 and an urban area of 1,968,324 (2009). The southernmost capital city in the Americas and third most southerly in the world, it is situated in the southern coast of the country, on the northern bank of the RÃ­o de la Plata (also River Plate). The city was under brief British rule in 1807 and was involved in the first major naval battle in the Second World War: the Battle of the River Plate. It is also the place where the Montevideo convention was signed in 1933 by nineteen nations of the Americas. The city hosted all 1st FIFA World Cup matches in 1930. Montevideo has a rich architectural and cultural heritage, the latter including tango and candombe. It is home to the longest Carnival in the world. According to Mercer Human Resource Consulting, in 2007 Montevideo provided the highest quality of life in Latin America. As a result of its excellent location, the city of Montevideo was established in 1726, mainly as a base to defend the eastern province of Virreinato del RÃ­o de la Plata from Portuguese incursions. A few years after its foundation, Montevideo became the main city of the region north of the RÃ­o de la Plata and east of the Uruguay River, competing with Buenos Aires for dominance in maritime commerce.[4] In 1776, Spain made Montevideo its main naval base (Real Apostadero de Marina) for the South Atlantic, with authority over the Argentine coast, Fernando Po, and the Falklands. At different periods of their history, Montevideo and Buenos Aires had resisted successfully the attacks of the fleets and armies of many European nations. The city fell under heavy British influence from the early 19th century until the early 20th century as a way to circumvent Argentine and Brazilian commercial control. In the year 1811, the forces deployed by the Junta Grande of Buenos Aires and the gaucho forces led by JosÃ© Artigas had started a siege to the city of Montevideo, which had refused to obey the directives of the new authorities after the May Revolution. The siege had been lifted at the end of that year, when the military situation started to deteriorate in the Upper Peru. It was briefly occupied by Britain in 1807, then from 1817 to 1825 it was occupied by the Portuguese, and it was repeatedly besieged by Blanco leader Manuel Oribe and Argentine dictator Juan Manuel de Rosas between 1838 and 1851. Between 1878 and 1911, British-owned railway companies built an extensive railway network linking the city and its port to the countryside. German pocket battleship Admiral Graf Spee - During World War II, a famous incident involving the German pocket battleship Admiral Graf Spee took place in Punta del Este, 200 kilometres (120 mi) from Montevideo. After the Battle of the River Plate with the Royal Navy and Royal New Zealand Navy on 13 December 1939, the Graf Spee retreated to Montevideo's port, which was considered neutral at the time. To avoid risking the crew in what he thought would be a losing battle, Captain Hans Langsdorff scuttled the ship on 17 December. Langsdorff committed suicide two days later. On 10 February 2006, the eagle figurehead of the Admiral Graf Spee was salvaged. To protect the feelings of those still sensitive to Nazi Germany, the swastika on the figurehead was covered as it was pulled from the water. Satellite view of metro areaMontevideo is situated on the south coast of Uruguay, along the Atlantic Ocean. The geographic coordinates are 34.5° S, 56°W. Despite the average elevation of 43 m (141 ft), Montevideo has extensive beaches and seaport areas at the waterfront, characterized by the Rambla of Montevideo. 18 de Julio is the city's main avenue and extends from the Plaza Independencia, which is the junction between the Ciudad Vieja (the historical quarter) and the rest of the city, to the boundary between the neighborhoods of CordÃ³n and Parque Batlle. History from Wikipedia and OldCompany.com (old stock certificate research service)